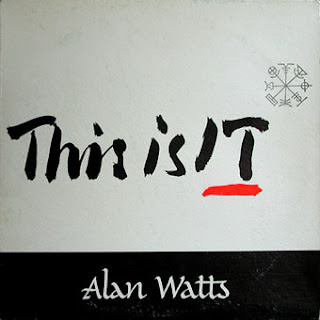 With an album cover that looks like its made with the included graphic design software on your brand new Windows 98 PC, Alan shows us all how to empty rooms as well emptying the after-life with some truly horrible,but hilarious primal screaming,ecstatic chanting, and general middle class tomfoolery that would send your soul banging their ghostly fists  and screaming to be let in at the gates of Hell.Only to be informed that they were already there,and were victims of all that christian,Islamic,Jewish and Buddhist propaganda.The punchline being that the former underworld of eternal punishment was in fact the best place to be post-mortem.In other words This was NOT....IT!
Listening to the opening 'spontaneous musical happening', as Alan calls it, was indeed an experience of great joy on my part.So much so that i simply had to play it again.Hearing university drop outs, expunge all that middle class Caucasian guilt by speaking,or in this case shouting, in tongues to a tabla backbeat, is enough to make one trot along joyously to the nearest new age happening at the local community centre.As well as screaming like a lobotomized buffoon,you can keep one eye open watching your fellow inductees gurning and idiot dancing to a CD of indian percussion.Stifling the wrong kind of laughter.....that is unless they're watching you with one knowing eye open too of course.Which is better,because then you can go down the pub together afterwards and have another laugh.See you next week John?...er...yeah?

I have a trustafarian Belgian friend, who was the victim of some pretty horrific sexual abuse as a child,and he has tried everything new age that has been invented, or will be invented.He's done Ecstatic Dancing, Primal Scream,re-birthing, and south american 'shrooms;his favourite being the very popular fuck-up magnet,the 'Ayahuasca' experience. Suffice to say that all this has helped the flashbacks not one iota ,yet neither has conventional Psychiatry either,so the logical conclusion is to do neither but use the time honoured, and very unfashionable, male method of 'Not Talking About It'. Build a compartment in your mind ,put all the fucking rubbish in there and throw away the triggers.
So my answer to your mental torture is simply to compartmentalize,while playing idiotic proto-hippie nonsense like anything by Alan Watts,and cheer up for fuck's sake! You only live once....and its very short.
There was a box set called "The Essential Alan Watts",released after his migration to eternal paradise in 1973.
I think the word 'Essential' is some-watt un-essential in this context?
The other best track on here is "The End" by the way.
THE END.
Tracklist:

The essential Alan Watts box set is the first box set
that has fewer tracks on it than any one of the original albums.

One hand clap that, Watty!

I am considering posting Alan's 2 hour long lecture on the summer of love...that is particularly un-essential...but a good source of dialogue sampling. I'm waiting for the essential Deacon Blue box set...which should actually be empty....there are many others that good have similar releases.
Maybe there's room for a prank record label out there that provides empty spaces for all the really awful groups out there,and charges double the price.
Afrfter all...is any music actually 'Essential'? Oxygen, food etc,that's essential.....Jean Micheal Jarra's Essential Oxygene, special expanded edition...empty of course, or just full of CO2.

A lot of CO2 has been expended to keep
remaking copies of Oxygene.

I've heard that Jarre is responsible, personally, for 0.000001% of all carbon emissions made by France since the industrial revolution.