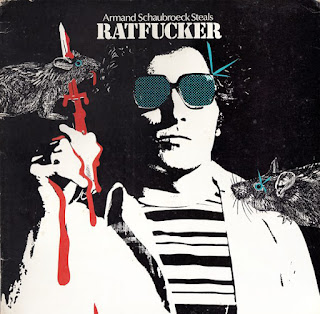 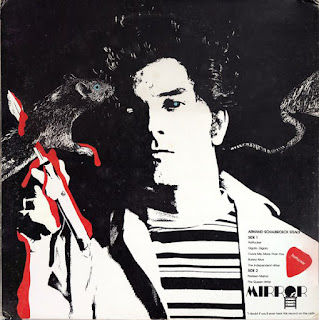 Tee-Hee-Hee.....This one seems to be popular. It's got lot's of sweary cuss words on it....well,I say lots,it's actually mainly just one sweary cuss word repeated a lot as a pronoun or verb.Gee, this guy must be one of those "Punk Rockers with their spitting and their habits;what they don't realize is that i only wanted to be looooved!" (Jah Wobble, Fodderstompf 1978)
Armand only wanted to be loved,ie Noticed.So I think he's now convinced himself that he invented Punk Rock.
How do you become a Punk Rocker man when you're over Thirty? Simply, add lots of profanity to your rubbish tunes,and get an album cover that looks like Lou Reed's "Transformer" artwork.To up his Proto-Punk credentials, he does a very good Lou Reed in talky mode impression for the title track, plus extra sweary cuss words....I'm frightened.
Armand, did however, miss a vocation here,as he continues that off-Broadway musical feel that permeates all of his work.This could have been the follow up to the Rocky Horror Show, minus the catchy bits.
Someone mentioned that classic Stan Laurel line from "Brats" in the comments section,which can certainly be applied to crazy man Armand..."You can take a horse to water but a pencil must be lead".
You can surround yourself with all the instruments on the planet,but that doesn't mean you know how to use them.
There must have been a delivery of a few Syndrums to "The House Of Guitars",as they make a brief appearance on Disco setting on a couple of the tracks,even before Joy Division used one!?
On the cover it states that 'This album is dedicated to the late Peter Laughner,self-destructive founder member of Pere Ubu and offshoots.Like a little brother,Armand was obviously impressed by Laughner's incredibly dumb lifestyle. Peter lived the R'n'R myth to the maximum and made the ultimate sacrifice and died for his own sins,definitely not mine!Rock'n'Roll Jesus's should not be allowed to roll away the rock once they have been entombed.
Armand, like countless millions of others,was trapped in the romance,or pretense of the Rock'n'Roll myth.The mystique of self-disintegration, hollowness and dishonesty, coming forth from this incoherent rage at the so-called establishment. And this self-disintegration, in most cases is also a hoax, since most of these people, like Marilyn Manson or Smashing Pumpkins(I don't know any modern Rock groups to use as examples), are well organized hustlers,like our Armand here. It’s very rare that someone like GG Allin, John Beverly and Nancy(they could have been a puppet act with a neme like that?), or,cough, the Cobain, lives out the myth by actually destroying themselves. You do have the occasional suicide or overdose, but what is more normal is for them to become enormously wealthy, like Eminem! It’s the youth rebellion industry. This mystique of bottomless emptiness is clearly not real. I mean someone who actually was all those things would just melt in their tracks if they were infinitely hollow, alienated. It's as if they want to keep falling through the rotten floors of illusion forever (I paraphrased ex-VU person Henry Flynt for this truth by the way,if you didn't notice?)......there are far worse cases than Schaubroeck of course, he's just playing at it, but he's certainly a Hustler, who really just wanted to be looooooved!....and sell you a guitar.....maybe even a Syndrum?
Tracklist:

Thought you might dig Mr Cope’s take on it:

That Ratfucker could even remotely hotlink to Stan Laurel is truly epic.

I remember seeing an ad for this in some magazine, so I guess he was noticed. Never felt motivated to pursue it any further. Ratfucker, swell. I love me, more than you seems to be the point, dunnit?

Aces high Jonny for the Schaubroeck stuff. Could Shakin' Shakin' and the live one be in the mix perhaps? His guitar/music store is some kind of mecca, it is reported.

Also I some notice of a new release out after a 30 year span away from such activity. Too lazy at the moment to search where I found that notice, but y'all have computers too.

Thanks for the posts and the snappy narratives as always.

Kept seeing his ads in Trouser Press back in the day. I never ordered anything because it seemed like he was trying too hard and the junkie aesthetic was always super-stupid. Johnny Thunders and Lou Reed deserve a bricking for that nasty little trend. Will definitely check this out now.