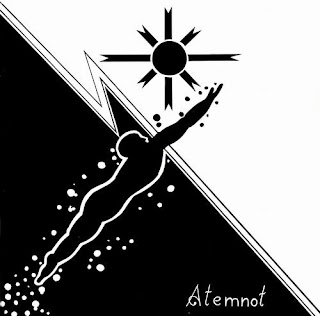 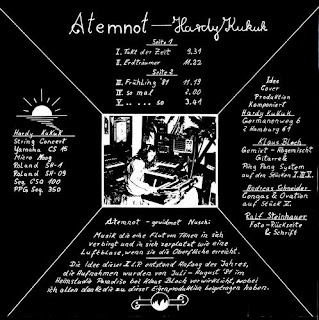 Take the 'U's out of Hardy's family name, and you're left with 'KKK'......i'm sure that's just a coincidence, but this kind of searching for your own meaning in a seething cauldron of nonsense, finding faces on mars,and the refusal to accept that celebrities die of enything except murder,are a strictly human trait that will end in our own destruction.So if you have a conspiratorial mindset I recommend that you avoid such things for your own,and everyone else's, good.You have been warned.
Hardy,was also the electronic conspirator for Klaus Bloch of A La Ping Pong non-fame,and in return Klaus appears with guitar and space-echo on Hardy's solitary self-released album from 1981.
Tangerine Dream had been going for over a decade by the time Hardy put this note for note perfect rendition of every TD song ever recorded;but he managed to do it in the space of five tracks....then merged back into the wallpaper,which we all wished that Tangerine Dream would have done after "Phaedra"....
Nah, i didn't mean that, TD were great, at least up until "Tangram",which coincidentally was about the time Kukuk unleashed this respectful pastiche to fill that particular vacuum.
The synths are gorgeous,fulfilling all those analogue clichés that get bandied about, hither and yon, by silly sods like me...such as,warm,phat,....er warm.....and er.....phat!? Surfing the knob twiddling Sine wave in such satisfying ways.
These people made these records in the full knowledge that once the 1000 copies had been sold or given away that it would be forgotten,and the planet would move on...but no.....crate diggers find it,hail it as a new discovery of great magnitude,and it gets re-released.Then there's the inevitable come back,again for just one album,which will indeed be,justifiably this time, very  forgotten.You just can't recreate a time and place.The motivations are different,and the desperation factor creeps in along with the chains of experience(Mind forged manacles as William Blake so aptly put it) .The fearlessness,or innocence of youth cannot be salvaged like an old synthesizer. Once you're fucked you stay Fucked.
Tracklist:

LOL, nice one, i amazingly, didn't spot that!
I award you a special Die or Diy? Brown Star

Rhe answer to your question however is 'NO'

Hi Jonny can you add my blog to your bloglist? Thanks in advance.

Long time no read. Hope you are well. Best wishes from Munich.

I am still alive....its work that has curtailed my blogging.I will return probably next week.The end of the xmas rush..
Give my love to Munich.