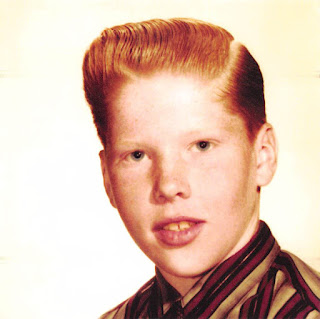 The second most famous ginger whinger after Elvis "The Pelvis" Presley.....(he dyed his hair black if you didn't know).....could be, and I did say 'Could Be',Die or DIY?'s favourite copper-top,Sterling "Jandek" Smith. Clearly,sporting a rather dapper chemically enhanced hair-do, he was around when Elvis was in full throttle Ginger denial as a pre-pubescent with, seemingly ,very proud parents? The cover photo looks like it was taken in a photographic studio to place on the mantelpiece of the Smith family abode.Evidence, maybe, that Jandek was born,and didn't arrive from outer-space like a gone wrong version of the ginger alien from "The Man That fell To Earth".
Those proud parents obviously didn't provide piano lessons for their pasty faced progeny and the evidence is on this compact disc of Jandek tinkling about on a grand piano for just shy of two hours....HELP!
This is the reason why the era of "the Public Piano" is coming swiftly to an end in railway stations across the globe; probably under sentence of death in places like Saudi Arabia. Or you could try playing a piano in public in Taliban-era Afghanistan, to invent the much needed phenomena of the 'Suicide Pianist'...the fight back starts here!
Keith Jarret this is NOT.It's improvisation by someone who thinks improvisation is just moving your fingers at different speeds in random places,Keith Jandek?.....although if that was the actual concept then I take everything I just typed back....but I severely doubt it.
I can't listen to this,and that's saying something.I would even leave a Pub if some smart-arse put this on the imaginary jukebox. Although, if that Jukebox existed, I WANT ONE!
This is the Paradox that Jandek is.He is obviously pure unlovable Shite,but is it not that quality that makes him great? Most clueless bastards would have given up after album number one and a half, like The Shaggs nobly did.However, with shear bloody-minded insistence,he penetrates the psyche of some of those poor fools who dare to tread that unholy back passage more than just once.
I listen to Jandek infinitely more than Keith Jarrett's po-faced solo piano neo jazz-classical intellectual panderings.I don't even leave The Koln Concerts out when my groovy artist chums pop round of an evening....mainly because they never 'pop' round is the reason for that particular advantage of the friendless.They just stay at home listening to the Koln Concerts every evening;just in case someone 'pops' round.Also, I have Zero Jandek Vinyl to display,which is a rather inexcusable and tragic oversight by 21st century Corwood Industries. I certainly don't want any of those awful scratchy plastic CD cases anywhere near me thanks, not even a mint copy of "Porto Saturday" by Keith Jandek.....in any format.
Tracklist:

I was asking for music and you give me Jandek, which usually makes me very happy. But I agree: This is utterliy horrible. What I really detest about it is that in the first 30 Minutes of both "pieces" Jandek actually pretends to know how to play the piano. I suppose that's what it sounds like when a kid has had piano lessons for a year and now wants to impress their grandmother. It sounds as if Jandek wants it to sound like ... music. This doesn't even work as a proper provocation even though I do feel provoked, I suppose. Please do keep posting Jandek!

"Keith Jarrett this is NOT." Lol. Haven't even listened yet, but somehow I know it's gonna suck. Anyone else long for the days before Jandek was "famous"? I can "appreciate" all the other stuff, but when this guy's on piano... Fuck. Jandek on piano is like the perfect antidote for those who find, say, John Tilbury playing Feldman "pretentious" or whatever. And to think, I used to find Dave Stewart's (the cool one) dismissals of inept musicianship annoying.

Re: that jukebox comment. Back in the day, back in Providence, RI, there was this jukebox in the Olneyville New York System (crappy fast food joint) that had Olneyville Sound System on it. Awesome!

I dunno, the last time I heard the Corwood representative play piano, I liked it in aimless non-directional way. It beat the fuck outta Jarrett, what with all that nasely wining and obnoxious histrionics. If he could loose those, along with the spoiled brat-a-tude, I'd like him just fine.

Jandek survives artistically because he doesn't act like Schaubroek. Survives physically because he is not as disturbed (or ill) as Daniel Johnston. He
never pretends to be a rock star. He's just Jandek. He knows he looks funny.
And those early album covers, showing half a room in a placid framing. That's Jandek.

rev.b ....don't forget that Jarret's 'fro was rather too bulbous at the back,yet flat and semi ear covering at the sides to be cool. assuming the shape of a visor-less hair helmet. This always put me off when i inherited the koln concerts as an adolescent.