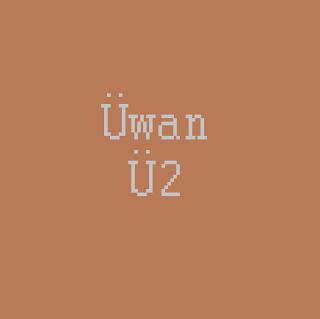 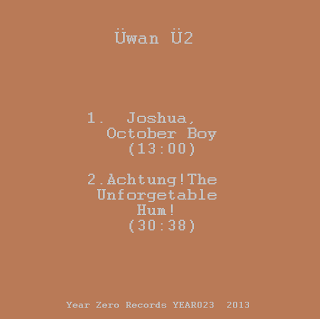 Gawd Blimey, luv-a-duck, guvn'r, I forgot about this album i made back in the early 'teennies' for the magnificent Year Zero Records netlabel.(clears throat)
An improvised guitar drone fest on the subject of the abject U2.As the first Üwan album was called "Ü1",'twas only natural that the second outing would be monikered "Ü2".So the connotations were obvious,and a chance to slag off this terrible group with scything six string noise.
Basically,it's another Shackleton in a Ü-boat style exploration into the eternal combination of Guitar, Drums, effects, and sound collage from our favourite free rock improv combo,Üwan.A kind of an subconscious abstract tribute to U2's unaltering longevity. This is what you'd get if one placed Bono's career minded stadium rockers' back catalogue into a food blender.I know i'd like to push a certain vertically challenged lead singer of an Irish stadium rock band's face into a blender anyway.

All the notes are there, but not necessarily in the right order, you'd be pleased to know.
What we have here is an improvised drone and feedback ballet score for people who hate ballet. An opera for the deaf,or a painting for the blind.But above all for people who hate U2's guts!

DOWNLOAD it HERE!
or
Stream it HERE!
Posted by Jonny Zchivago at 08:50

A commissar comes in to announce the sanitation regulations, then adds: "The first carriage of this train is occupied by sailors of the heroic Kronstadt Sailors' Soviet!"

Crikey missus, thats exactly what I was thinking!

Johnny! Endless thanks for the amazing blog! I noticed this post yesterday and was overjoyed! I made an album a few years ago fueled only by a life long contempt for this very band of TWAT waste. Hopefully there are more of us out there! http://www.mediafire.com/folder/s7hvamxszlpo7/Yew+Two+-+New+War

Well there is Negativlands album "U2",for which they were taken to court over.
We are very much not alone.