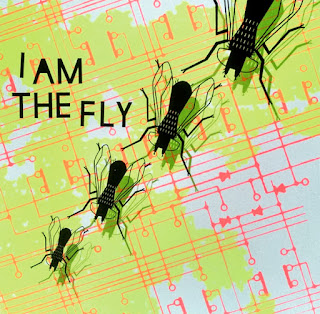 While we're on the subject of Synth-Punk, anyone fancy some Modern Synth-Punk from Essen, Germany?
Made by girl/boy duo 'I Am The Fly:
MUSCA domestica male (vocals, bass)
MUSCA domestica female (organ, drum machine).
A Philip K. Dickensian band member format in use there,which is always welcome as I am a Dick-head (in all senses of the word),and by sheer chance I love Synth-Punk too.....and Wire(!)...so ,already, what is there not to like about this self-financed DIY vinyl?
I have a tenuous family connection with Essen,as my late father visited there at twelve thousand feet on a couple of occassions in 1941/2 (read about him and 'it' HERE!).
I notice that it's the 79th anniversary of the first Essen Raid on the tenth of October.....so to celebrate(?) or commiserate, and maybe a small apology,we bring you the sound of modern-day Essen....note the lack of exploding ordnance in the background to prove it.
The tracks themselves are splendidly bass guitar driven two note symphonies reminiscent ,musically if not vocally, of The Screamers organ-led onslaughts as if fronted by a GM Fly instead of Tomata du Plenty;and a drum box replacing the real drums. Maybe the bassist likes New Model Army too, as the bass playing does suggest a ghostly influence from those crusty punk preachers somewhat;especially the plagarized,but modified, line from "The Spirit Of The Falklands"...'the natives(inmates) are restless tonight sir'. (there seems to be a theme of Brits bombing the fuck out of everybody going on here!....we're sorry!)
The singing android tells us 'there is no therapy for being a human',except maybe if you help out by buying and listening to this noble single.The other options are far too horrific to list here.
P.S.S.T...I think i mentioned the 'War' once, but I may have got away with it?
Tracklist:

Email ThisBlogThis!Share to TwitterShare to FacebookShare to Pinterest
Labels: 2020, Germany, I Am The Fly, synth punk

Thanks a lot for introducing me to these great native tunes from my hometown. Had to buy them immediately.

Very Good Herr A, one must always support local business....especially in these shite times.

You had me at synth-punk. Purchased. Thanks.

It's on my hit list.
Was it a coincidence that you posted this or was it related to the star of last nights debate?

The Falklands War? Another war staged to test modern weaponry with an old ally who the UK government still gives money in millions to each year. Mustn't let Labour in, use a war to keep bitch Thatcher in. CIA/MI5 tried to oust Wilson in the sixties (they fared better in Australia), they used agent provocateurs to get rid of Callaghan, phoney Marxists, Trotskyists, looney left, all agents to tarnish Labour and let the bastards in Blue rule. All descended from slave OWNERS who the UK taxpayer only finished paying THEM CONpensation for losing their SLAVES last year! Over 180 years! Now we have the fake coronavirus bullshit, bankers get rich, the poor get sore, same bastards!

Thanks for the heads up! Just purchased as there is no hope of finding this in the USA.