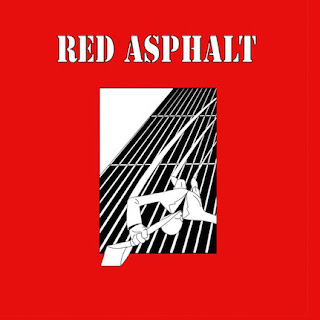 I was gonna tie this in with Brad Laner's role as a Synth Punk Pioneer, but its more than that.
There's something 'Prog' about this,but they had a synth player in the line-up, and were active during the Punk epoch in San Francisco between 1978 and 1982, so Synth-Punk it is.
They sound like those groups who were really resting/unemployed Actors who play music as a way to get on a stage, Like MARS,Bongwater, Punishment Of Luxury, and  Shoes For Industry (surely The Tubes had to be frustrated actors too?) among others.
Like an agressive off-broadway musical,they reek of professionalism, in that conceptual album kind of way.
They had their moments,but like if a Saxophone appeared in a Punk group they were automatically called Jazz-Punk, if a synth made an appearence, it was Synth-Punk;orif you were too stagey, you were Prog-Punk, or Prunk as Cardiacs called themselves.
Tracklist:

A1 Red Asphalt
A2 Goodbye Sunshine
A3 S.T.A.B.
A4 Jive Puppet
A5 Survival, Evasion, Escape
A6 Peligro
A7 Human Capital
A8 Nuclear Judas
B1 Refugee
B2 Factory Dead
B3 Ghost Town
B4 White Meat, Dark Meat
B5 Phone Call From God
B6 Hurtling Moons Of Barsoom
B7 Gothic Night Summer Dream
DOWNLOAD some theatrical blood on the asphalt HERE!
Posted by Jonny Zchivago at 04:44

Red asphalt, next up needs to be Blue Daisies, which Bran reportedly dropped out of cuz he didn't like all the nudity and whatnot that was going on on stage with those lads.

I doubt anyone ever called the Suburban Studs "jazz-punk."