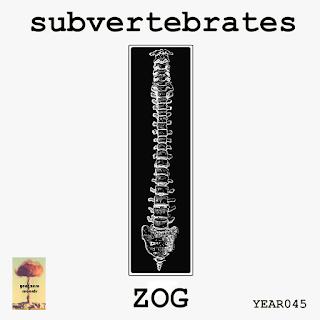 As we're on the subject of Year Zero Records ,there's been No new ZOG music for a long time, as we were poncing about waiting to have a vinyl record release, but that looks like it ain't gonna happen.That coupled with drummer boy....i said drummer boy!....nearly cutting his hand off with a stone cutter.(not his fault by the way!)
Following his emergency Helicopter evacuation to hospital they managed to sew it back on,not quite a Def Leppard incident, but he'll never be the same again.It was his wanking hand too,so it's deadly serious!

Luckily we recorded lots of shit before the accident, so here's the first installment of the usual improvised Bass and Drums interplay,with some freeform electronics atop, placed like a cherry on a cake laced with LSD.

DOWNLOAD and subvert your spine HERE!
or
You can STREAM it direct to your nervous system HERE!
Posted by Jonny Zchivago at 09:44

Hi - love your site - lots'a goodness..
Did not know where else to put this..
I have a site
https://cult-of-decay.blogspot.com/2020/05/blog-post.html
It has a bunch of old Detroit, Mi industrial on it.
Since the site (MEGA) will no longer let me use it... it will soon disappear due to computer compatibility issues.
Nun the less, you seem interested in this 'stuff' so grab it if you want.
I mainly put it up for the survivors involved with the bands..
If interested there is more available ..
Thanks for all you do ..
-Michael
naometriadesign@gmail.com

"Having Children Is Child Abuse " Oh oh, are you a simple asshole ?

They're always anonymous aren't they?

No. i'm a complicated asshole.......now explain why having kids isn't child abuse?

You try to say that you use your real name ?
To choose a pseudo is not always the purpose...

Ho ho! No no, you explain why having kids is child abuse !

My Pseudo is easily traceable,its my public persona..with photo's.Whereas you're just 'Anonymous' which kinda sums you up.

If you had any brains, you could work out that bringing a child into this shit-hole of a existence isn't an act of kindness is it? A selfish need to procreate and mould a little mini version of oneself is far from commendable.
Not you try and explain why it isn't.

I'm not here for my ego trip, just to find some music and thanks a lot for that... Here, on the internet, I'm just some profile, since the beginning and you maybe recognize my sort of "trying to speak english" way (?) I'm bored to login google !

I used to think about that dark future (Oups! and present now) and didn't ever wanted to have children too! But 26 years ago happened a "little accident", she refused to abort, so after 6 month of prayers (it never happened to me one time before!!!) for the death of this unfinished creature, I accepted the idea and met my baby like an interesting discovery. I realised very quick that I have a great sense in understanding, a big empathy and good ways of communication that could calm the situation including the anxiety of the mother. 3 years later happened a second accident, like a second baby boy coming and I began to stupidly prey again for some months. Like for the first one that began to go to school, I spent my days with my baby for two years while the mother was working. I've always been a good one for them, pushed them to trust themselves and to think and choose. When they was 7 and 4, I left the mother and got them half time till some years ago. I never forced them to go to sleep at night or to be on time for dinner or to believe anything, just presenting my opinion. All the childhood without antibios, only cured with homoeopathy, drinking water no sodas, without TV, they never asked me for more because they was happy!

Now, they're 26 and 23, no crisis happened, there are no obligations between us, no Christmas time. Both are very different and we really love each other ! And we just feel the same about corona bullshit !

5 years ago, after a funny decade of night life, I met a girl...
One is 3 1/2 and the other 1. Girls. I hoped that it failed so hard that it happened !
But by chance, 3 big friends of mine had baby (girls too) that year and that was ... like ...normal !
So the last one, the less wanted one seems like being incredibly intelligent, strong, funny than it's okay for me! the big sister was a very easy baby and I am now an expert in child and anxious mother psychology! I never promised a perfect world, I always say the truth about the fact that I didn't wanted them and explain why... No abuse at all in the story !

Ahh,now i understand your tetchyness, you're a breeder.A walking baby factory.
I managed to keep it to one accidental child. Too many humans.
Thanks for your life story.

And it's not my life story, my life is essentially made of music and sounds and graphics and texts and meeting people during that time...