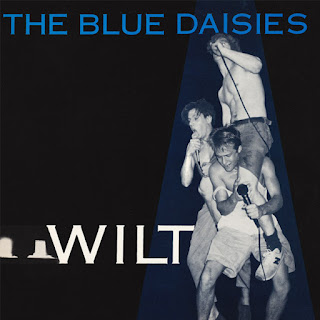 Oh Alright, let's call this 'Art Rock'.
Highly possibly done by unemployed actors as well by the sound of it. Brad Laner played some Drums on this, not the drums that sound like Bobby Gillespie's skinwork in The Jesus and Mary Chain...the more inventive stuff at the end.
I know less than nothing about this band,except that they come from L.A. although I understand that they liked to take their clothes off on stage regularly.......now, if they ain't actors I'll share a dressing room with Kevin Spacey the next time I tread the boards at the Old Vic.
Fairly original abstract,slightly rude, avant-rock is what this is.
Featured on the soundtrack to 1986 movie 'Circle of Violence'(yeah neither have I!) starring long dead child star River Phoenix, who hated both the Blue Daisies and their music apparently.If that isn't a recommendation I dunno what is?
Tracklist:

A1 Anthem/Pillars
A2 Slot
A3 Suck Me
A4 To Be, Continued
B1 100 Tears
B2 Dance Dance Dance
B3 Everything And Nothing At All
B4 Es Amor (Hand Job)
B5 Beautiful Kid
DOWNLOAD whatever thou wilt HERE!
Posted by Jonny Zchivago at 16:18

I shall no longer think of Brad Laner simply as "that guy from Savage Republic and 17 Pygmies."

;^)
Had a mix tape back in the day with this and butthole surfers.
Sort of a theme, I guess.

@ icastico...How dare you deprive these noble artists of roylaties with your condonance of Home Taping!? Its people like you that are killing huge corporate record companies and encouraging actually working live if you're a musician/non-musician.....well done young man.