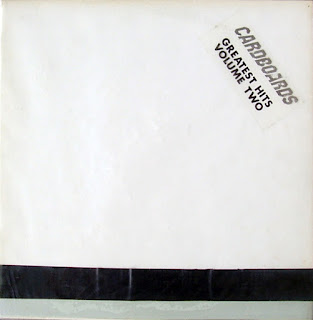 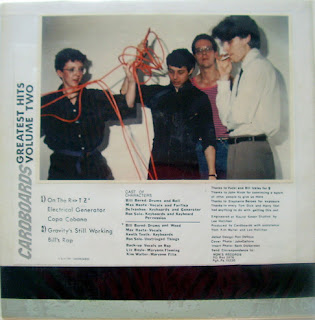 The synth-punk thing wasn't just confined to California, for a start we had Suicide in New York for the previous decade up to 1981 and beyond,Crash Course In Science were in Philly. In Pittsburgh there was The Cardboards.
No guitars in this ignored group, among the cheap organs and synthesisers......real drums were the only real option in 1981.....they had a tone generator.....how Synth-Punk is that?
Naturally the American angle on Synth's was to make something rocky and exciting, unlike in the UK, who saw another opportunity to make classic 'Pop' and sell it back to the USA. For some reason, this angle didn't occur to American musicians or businessmen.Its the same story for many other American innovations, especially Musical ones.
One can only think of West Germany and maybe Belgium,where there was something synth-punky going on...but not really...the Rocky bit had been never really manifested itself on the Germanic musical chromosome,over-ridden by the dastardly Wagner gene.
Tracklist:

A1 On The R=>Z*
A2 Electrical Generator
A3 Copa Cobana
B1 Gravity's Still Working
B2 Bill's Rap
DOWNLOAD in recyclable digital cardboard HERE!
Posted by Jonny Zchivago at 09:21

No mention of The Screamers ... JZ, what the heck?! Keyboards and drums only, first demos in 1977. Wait, are you going all anal-retentive on us and insist on the presence of a synthesizer of some kind?! (All I hear w/the Screamers is electric piano and organ, but I could be wrong.)

On my Screamers post years ago, i said there were no synths...but some bright spark corrected me and listed the synths they used.Now you're berating me for allegedly insisting on a synth for 'synth-punk' qualification?
I did mention the Screamers a couple of posts ago as primary Synth-Punk movers,so don't wanna repeat myself;-)

Sh*t! I hang my head in shame! The Screamers are not in the index/keywords for Die or DIY, but googling I found the THE DEMOS posted in 2014. This is called "not doing your research"! And I overlooked the Screamers being mentioned in the Earth Dies Burning post. My apologies! What abominations from the '80s should I listen to in penance? Falco? Opus? (The latter provided the source for one of Laibach's best covers, "Life is Life.)

I Sentence you to 12 Hours of Bruce Springsteen singing and dancing to "Born In The USA and Dancing In The Dark in a loop at ear bleeding windows open levels....although my slack blogging in not having a Screamers keyword/tag on the post, i will listen to Elton John's I'm Still Standing for three hours non stop...and sing along to it for extra measure!
We must put this grim episode behind us.

The original lineup of The Cardboards was the even more spare vocals, keyboard, saxophone, and drums. That version of the band never made it to vinyl (or even cassette) but can be seen here: https://lux.org.uk/work/debt-begins-at-201