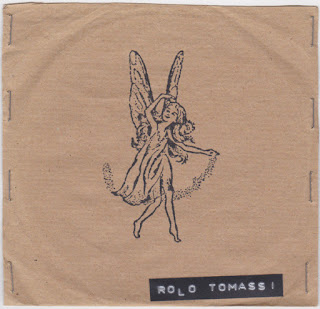 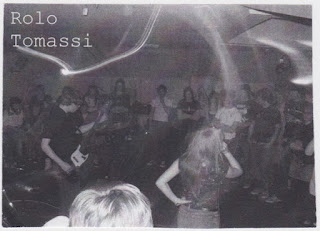 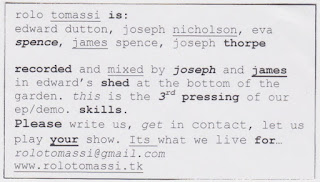 This is a CD-r....Remember CD-r's.....No?..,and remember how hardcore punk bands each self-released several tapes a month called 'Demo'?..  and then there's MySpace......No?, and CD-r's??? ...why?
That's how bands promoted themselves back in the early naughties. CD-r's disintegrated over time, and MySpace killed itself by totally unnecessary restructuring nonsense and fiddling around with the format. It's still there, floating in cyberspace like the dead astronaut in 2001,after HAL had done for him. Maybe it was HAL who reprogrammed MySpace? If so, would HAL do us all a favor and  please go and reprogram Spotify?Then Twitter, and somehow abandon Musk in space. Probably when one of his stoopid rockets fucks up when he's onboard...can you fix it for us HAL? Please?...Branson and Bozos too while you're at it.
No doubt that Rolo Tomassi are on Spotify too these days,as I saw they did the Download Festival a year or so ago,on the very spot The Monsters Of Rock Festival used to be in the male only days of NWOBHM.....we don't count Girlschool as female by the way.
Rolo don't wear Lycra tights,or have massive curly mullets.Very admirably,Rolo have an unpretentiously sober dress-sense,which is all well and good,but i kinda miss taste-bypassed idiots like Twisted Sister, and Kiss....but they are Americans ;we need Americans to do the things more educated persons would never stoop to.Which leaves us with straight edged wild time signature tennis such as Rolo Tomassi,who are obviously too intelligent to wear make-up,or lycra....lead singer/screamer Eva excepted of course.
This type of Post-Hardcore Math-Jazz does have a tendency to be rather over-clever,and the group makes this mistake on the long third track,which has one of those long silences eventually revealing a wild hidden track, as they obviously had played their mum's Nirvana album and came away impressed by the delayed appearance of "Territorial Pissings" at the end of that horrible record(CD version)....ah well, Never Mind.
Tracklist:
1 Breathing Through A City (Is Much Harder Than Just Breathing) 0:36
2 The Tentatively Titled "Film Noir" 2:28
3 ...And Then The Mannequin Spoke 10:00
DOWNLOAD not the download festival HERE!
Posted by Jonny Zchivago at 12:13

CDrs? Hardcore punk bands? “My”space? D.I.Y cuz no one else cares? Yeah, I remember ‘em, I remember all of it. Best I discard and forget it all? Probably. But I choose to to cling to that joy and its related agony, in the hope for something that'll make it all seem justified and worthwhile. Perhaps this will be the thing...or not. In any case, thanks for this and all the rest. Hope you’re feeling better health-wise and that Cvd-19 long term isn’t a something you’re having to deal with.

This blog is always original and intriguing, so just dropped by to say thanks for the challenging and inspiring music and the commentary.