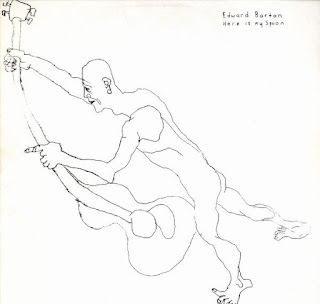 Edward Barton looks and sounds like an artist,he may even be an Actor,for he once resembled a Drama student,or a member of Furniture (UK arty one hit wonders)...but we'll settle for 'poet'!?
Young Edward, first came to our attention attacking his acoustic guitar while writhing on the floor and screaming about his Mini on the exceedingly awful and sickeningly Hip early evening pop magazine programe ,"The Tube".The vile creature that spawned Jools Holland in his mission to make music as bland and pointless as yer Aunties cakes.A raison d'etre that this boogie woogie terrorist embraced with all the efficiency of a death camp Kommandant and the spiteful enthusiasm of his uncaged wife.
Inexplicably,YouTube has no footage of Barton's first appearance, but luckily there is a performance of his debut single,"I've Got No Chicken But I've Got Five Wooden Chairs".
Edward embraced this fifteen minutes of fame eagerly,and made it last about twelve minutes before spending the next thirty years in artsy obscurity.
His other three minutes of fame belong to the unaccompanied vocal Hit single Edward penned,With girlfriend, Jane, "It's a Fine Day", which was one of those rare 'Good' singles that hit the top ten in several countries.Other versions exist,including one by bloody Orbital!?
His songs,"It's a Fine day" excepted, have all the requisites that make Jandek's works so provocative,except I rather suspect that our Edward has the sense of Humour that The Corwood representative so patently lacks....which of course, makes it Funny.
Eddie's songs are funny too,but he actually intends this....so,he is an Artist after all, yes?
Alas, as a lifelong Mini owner,I thoroughly approve of Edward Barton.

I can't believe you have a mini

Yeah its to compensate for my massive knob.....but of course my latest mini is one of those BMW ones,Cooper SD. First car in a huge line of cars, was a Austin Rover mini cooper back in the 80's.
'nuff said...i fucking hate car bores.