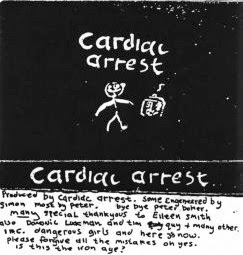 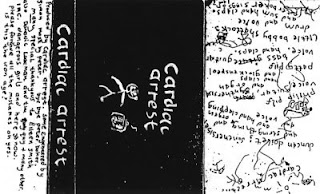 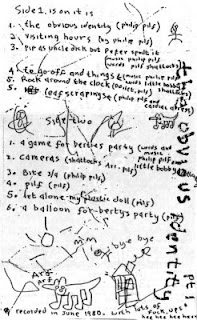 I dunno if it was the head trauma I suffered during my recent much publicised car accident, but I've found myself listening to The Cardiac's a lot,and actually liking them. Previously, I found them tiresomely over-clever,trying too hard to be quirky,and more than a tad irritating.Post brain injury, I now love them!? But, above all, I love the Cardiacs when they were called Cardiac Arrest.
I had a Brain scan, and they told me that despite my memory loss,my brain appeared 'Normal', contrary to previous observations from other, unqualified, sources. They (the 'experts'),never warned me that I would have an insatiable desire to listen to The Cardiac's,but I do?!
Some cheeky chappies have referred to this music as "Pronk"(a melange of Punk and Prog!),as an attempt to elevate this group to a 'special' place inhabited by the quirky undefinable's like Sun Ra and The Residents etc.....this is pure shite of course. This is no more progressive than the whole of the post-punk scene,which was in fact nothing more than a prog revival in short song format,without the solo's or sparkling capes.(I never understood what was actually wrong with a good sparkling cape?)
If the Cardiac's were the only band that appeared to mix prog and punk together, then what was XTC,Magazine, Talking Heads, and countless other 'Pronk' bands?......Post-punk will do nicely thank you.
Yes it's all very 'clever',and complex,in a herky-jerky kind of way.
This era of the bands progression showcases a  jagged edge that later incarnations hid away too much.
I'll keep taking the pills,and maybe one day i'll hate them again?...but for now.......

Yes, well said about the 'Pronk' tag. Never liked it either, neither do I particularly like the zealotry of some Cardiacs fans. One idiot on a post somewhere said he actually judged people's "cognitive abilities" and their worth as human beings by their reaction to Cardiacs' music. He was deadly serious too, the silly tool. Admittedly it's a (mostly male) minority but it irks me at times!
I first saw them in my home town of Reading in 1982 and have been an admirer of theirs ever since. Great upload - cheers - and you made me grin too :D
I don't know whether you were aware (probably), but Tim Smith had a heart attack and a couple of strokes in 2008 and has been unable to perform (or do very much else on the physical plane) since. Cardiacs fans and well wishers have rallied around to raise money for his treatment and recuperation which says it all about the love and dedication they feel for the man. Great guy, Timmy :)

I hope you keep liking them and post more of their stuff. Most of their stuff is impossible to find except at very high collector prices.

Indeed, in Die or DIY 1, i recall being on the sharp end of witless Cardiacs fans after using irony and sarcasm while writing about my unenthusiasm for their music. However, the irony of the main man having an actual cardiac arrest related incident hasn't gone unnoticed.
ps,
a couple more Cardiac tapes will follow.

Nice one.
Aye, there's a fine line there. The vast majority of Cardiacs faithful simply love the band and want to share them with as many people as possible (like Jehovas Witnesses..haha) which is fine. There's been a convention running for the past few years in Salisbury called 'The Alphabet Business Convention' with various Cardiacs-related/influenced artists...Tim Smith did make an appearance briefly last time, partly to thank those who'd helped him and raised money and obv to enjoy the show.

@ Anonymous: You can now find re-released Cardiacs material at their website here: http://www.cardiacs.net/
I bought a remastered CD version of 'Day Is Gone' EP recently from there. Amazing stuff. Oh, and check this out for some prime latter-day Cardiacs:
https://www.youtube.com/watch?v=OxhuQWKwbqY

I've still got the EP on 7" vinyl, and always thought they were a cut above the usual punk stuff of the period, but I never knew that they had made an album, so am looking forward to hearing this. Thanks.

capes are good. at a yes presser some years ago, a questioner wanted to know "what was the deal with the capes?" and chris squire and the others laughed in a way that attempted to deny all connection with the capes. Like someone in 7th grade bullied into betraying their dorky friend. And I couldn't help but think: for those who like the Yes sound, "put the capes back on!". a current band from hamilton, ontario "Zacht Automaat" who record everything to cassette has a cape every once in a while. find them on bandcamp, you may like, also i had an MRI and i have a normal brain too, i waved that paper at my family quite assuredly. "I have a normal brain!". Now i just need a cape...

Have Cape will wear is my family motto. As you probably know, I too have had an MRI scan after having my car smashed to fuck by an anti-cape loony(he's in court on feb 4th 2016).I have a normal brain, its official.
Wearing a cape onstage is far more 'punk rock' than being in one of those 'pun rock' bands. Biker jackets and ripped jeans are todays equivalents of the cape.
In my village we have a shaman who is never without a cape, but he does wear a Trilby with a long feather in it as well, so i can't vouch for his sanity; but he does look cool.

Thanks Johnny the tape is awsome , better than the 7 , reminds me of another uk new wave band “drop”.

Thanks Johnny, the cassette I do like it very much , takes a few listens , reminds me of the new wave “drop” band