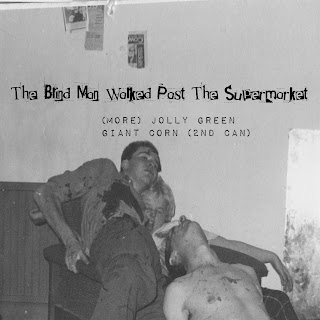 Yes, a second volume of  stream of consciousness, deranged,  DIY improv, from Leicester, in and around the golden era of 1978-80.Heavily abused Trombones,clash with scraping contrabass, tortured saxophone,and Eraserhead organ. Ten untitled decompositions,that fans of the The Good Missionaries, The Door and the Window, and other willfully amateurish free improv should enjoy heartily. Could even be better than the first helping. ?

DOWNLOAD another can of juicy sweet corn not even approaching its sell-by date HERE!
Posted by Jonny Zchivago at 17:57

Bloody hell! File under (un)easy listening! I do like track 5, which is the only one out of the bunch that does not have wailing brass sounds all over it - I think it was the experience of seeing Hawkwind as a young teenager in the early eighties, which coincided with Nick Turner's brief return and I can still remember the horror of his saxophone 'solos' over everything - must have scarred me for life - I still shudder whenever I hear Baker Street!

It started me thinking - where did the post-punk inclusion of jazz/brass instruments become a signifier of the "avant-garde" - I was thinking maybe Pop Group and the whole Y Records gang thing and of course there are the ATV/Good Missionaries performances with a lot of sax and the like.

Likewise, there was the whole parallel jazz-funk sound along with punk (which caused a few 'industrial' bands like 400 Blows to move in that direction - even the Chris & Cosey CTI albums have a brass section - which I really liked)

Anyway, I appreciate the post, it's a sterling service, keeping these things from vanishing down the memory hole.

Ahhhh, the ol' brass instruments in rock question. There are several rules that must be adhered to in the realm of rock and its bastard offspring.
1 - NO backing singers
2 - NO Keyboards
3 - ABSOLUTELY NO BRASS SECTIONS!
If you notice on Jools Hollands indescribably awful TV atrocity, nearly everyone has all three of these no no's in copious amounts.
Oooooh it makes me sick like designer hobo seasick steve,a regular on Hollands ' like rock'n'roll never happened show.
The rise of the free jazz influence in post Punk rests fairly and squarely on The Pop Group's sickeningly 'hip' shoulders....especially after they broke up. Pig Bag, Rip rig and Panic, Maximum Joy all displayed far too many brass instruments, and had such impeccable taste that it made me wanna stop listening to music. They so wanted us to know that they liked Archie Shepp and were more intelligent than us that their boring records sank without trace.Now the Pop group has reformed and sound like a bad Haircut 100.
I do like The Pop Group though,just not what followed them. 400 Blows were incredibly bad too, you'd never believe they evolved out of Three Minute war, and concrete.
Mark Perry's saxophony was a charmingly naive attempt to do some Ornette Coleman,but instead of playing all the right wrong notes he played the wrong wrong notes,so that counts as great in my book.
Same applies to TBMWWPTS,although i reckon brass features heavily because thats all the instruments they had.
Eurrggh...Baker Street.....here's another one 'Will You' by Hazel O'Connor.Its that show offy Kenny G syndrome,and that Kenny G tone that rattles my fillings.Should be banned.
Have you checked out me and belfi's tribute to Nick Turner?Bizarrely containing NO saxophones!:
https://youtu.be/Vc4EmF2cBAM

Forgot to mention the worst Brass intervention in rock'n'roll was on The Saints second album(Eternally Yours"). What were they thinking? Luckily the shear genius of the maximum r'n'r submerged those 'orrible trumpets,but they did go downhill from there.And don't get me started on Two Tone!