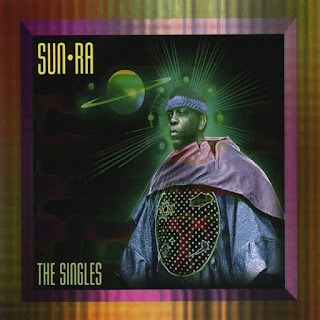 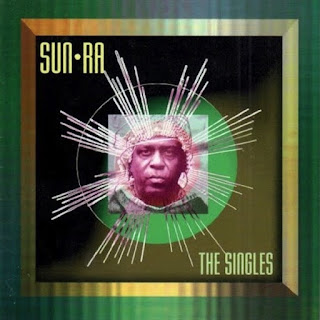 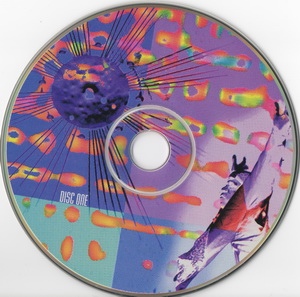 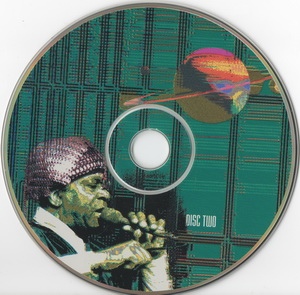 Space definitely is the place if you wanna escape this fucked up planet,and there's no greater vehicle to leave Earth with than Sun Ra and his chums.
If you wanna be 'Hip' these days you gotta drop Sun Ra into your 'ain't i weird' public speaking convo's, sitting cosily alongside Captain Beefheart and Coltrane. Its coffee table royalty for the pretentious who slip a recently purchased copy of "Atlantis" on the stereo when expecting visitors.But that's better than taking drugs to be 'hip' I suppose.
A lesser discussed fact about Sun Ra, is his place at the head of the pantheon of DIY artists. No, DIY didn't start with the Desperate Bicycles, as Sun (can I call him Sun?),was doing it in the mid-fifties. Releasing bizarre Doo Wop, Lounge Jazz,and Fifties Pop singles on his own Saturn label,sometimes in incredibly shorts runs of 10 to 50. Therefore these singles are impossible to find except on this fabulous double CD.
Among the foggy Doo Wop and Christmas Singles,which have their own charm,there is inevitably some crazy stuff indeed. Who was Yochanon, The Sun man.....a total nutter? Then there's Lacy Gibson's "I'm Gonna Unmask the Batman",which is pretty out-there.Some Sun Ra classic's,notably "Love In Outer Space" with its wavering time signature,and the sing-a-long "Rocket # 9",which talks about leaving for Venus years before Europe did in "The Final Countdown"(admittedly a classic in its own right,but for different reasons).Although as Venus has a surface temperature of 400 degrees plus,has a runaway Greenhouse effect,and rains concentrated sulphuric acid;I don't recommend that anyone gets on Rocket # 9 for real.
There are even a few edited versions of Ra's later free synth finger moving avant jazz,and a seven inch version of Disco 3000.So the coffee table avant-gardists won't be disappointed; even though this would be the only Sun Ra record they ever play in private.

+The missing two tracks from disc one HERE!

I used to have a cd copy of this years ago, don't quite know where it is now, so this very welcome.... you can't have too much Sun Ra... thanks very much!

Greetings from Vermont - thank you for posting this wonderful music...

I Will search space for the missing tracks asap!

Apparently this downloads 'Sucks',so i'll make a new file and upload it to Mega. hopefully this will make it 'Not Suck'.

Sheesh, Anon is being rather dickish today.....

I have this CD set, but you've saved me from having to do the to MP3 thing myself.

I haven't tried playing them for quite a while, but I've had the problem that some of the Sun Ra Evidences wouldn't play in at least some CD players. Other discs play fine.

Have now discovered the missing tracks and added them to the post for download.
Ain't CD's shit?

Space Lady and now Sonny Ray! A spaced-themed astral double-whammy! I never really got Sun Ra until I saw the video of the Live At Montreux performance on ye old VHS tape "back in the day" as I never ever say, and then it all made a strange kind of delirious sense.

Just as interesting as his music for me, is his status as the first modern 'contactee' (though he always gets criminally overlooked by the "UFO" community, despite the fact he predates the fifties contactee movement) and his lectures and interviews, scattered over the net are well worth tracking down as he was just as much a mesmerising speaker as he was a musician.

PS> He still has the power to shock - I posted the film Space Is The Place on my sadly defunct You Tube channel - it had about 70,000 steady views then one day it got flooded with dozens of "what the fuck is this shit" comments - seems some comedian called Frankie Boyle I think, posted a link to it and his fans flooded to watch it!

If you are new to Sun Ra, definitely watch Space Is The Place and the Don Letts documentary and the Live At Montreux performance.. or if you are terminally hip, don't bother with any of that - just drop the word 'Afro-Futurism' along with his name into the conversation, that should do it.

Ah Sun Ra.
Had the pleasure of seeing The Sun Ra Arkestra in a (very)small venue in New York,The Fez, twenty years ago.My table (we had tables!?),of just me and my girlfriend, just behind a table of two nerds with "Space is the Place" T-shirts, was privileged to a personal 15 minute sax solo from Marshall Allen who had obviously taken a liking to my woman.Serenaded by a free jazz sax solo by one of the legends of the genre,with a blue beard on this ocassion.I'm sure she appreciated this???...I know I did.
I had "Space is the place(The Movie)" on VHS,and sampled it for some of my drum'n'bass endeavors...erm...twenty years ago (Check out Thee Outside on Year Zero).
Letts,the posh rasta,did a documentary on Ra?.....I suppose he would have a good perspective,as he is diametrically opposite to Sun Ra!?

A personal serenade by Marshall Allen! Hell yeah! That is just wonderful - especially in a tiny club - the sound and blue beard vision must have been something else. Ah, the fringe benefits of a beautiful woman!

Will check out your Space In The Place sampling (and hey, 20 years ago, everyone got infected with the D&B virus, just listen to the Can Sacrilege album!) - one of my all time favourite films and its just crammed full of great dialogue (I see it has been recently reissued in of coursse a "deluxe" version - that's my birthday present sorted!)

Yes, Mr Don "I was there, I was everywhere" Letts did indeed make a Ra documentary, which is actually OK, some good interviews - I had it posted on my YT channel as well and I know a few others had it posted, but looks like the copyright cops busted us all.
Found it here in low quality (called "Brother From Another Planet", named after one of the best sci-fi films of the eighties in my opinion)

I think you can find it on torrent but if there are no seeds, I have a bootleg DVD of it and I would be more than happy to post a copy to you, no problem at all.

Thanks for this stuff