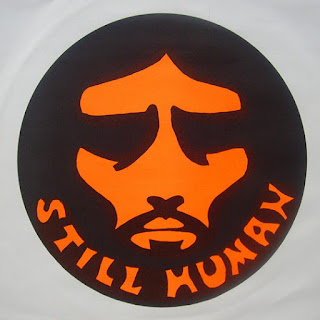 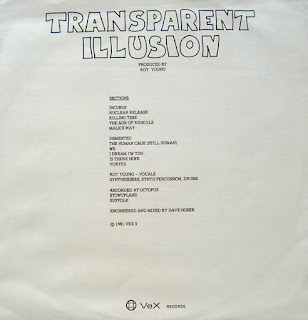 Although, the question, why anyone actually wants to be a Human begs analysis, the 'Human' factor,however, is very much in evidence with this quaintly charming off the shelf electronic one man band,amusingly monikered 'Transparent Illusion' . One Synth, one extremely cheap Drum box, and one human....Roy Young. About whom nobody knows anything about,except that he's Human, and probably still is.
Obviously Roy has been listening rather too much to his Gary Numan records, track 2 especially must have been recorded immediately after a lengthy session at home annoying the wife with Numan's "Pleasure Principle" on repeat....he sounds like he's got a wife somehow, rather than some spotty oik laying down tracks in his bedroom at mum and dad'd gaff.
All done and paid for by his good self,and solidly DIY in its sound, artwork and execution. Maybe even his wife paid for it all?
She must have regretted it when a thousand copies of "Still Human" arrived on the doorstep with no prospect of selling any of them.
Roy may have still been human back in 1981,as he evidently plays the synthesizer himself,with his own fingers (Who's a clever boy then?), with no aid from machines,but there are arguments for man and machine to evolve into one entity,unhindered by inappropriate emotions and keeping the creativity.
There would be clear advantages to being a machine,no emotional pain,hate or love,irrational or otherwise,eternal existence,providing the raw materials are available for repairs, and more topically,a lessened threat of self destructive wars. No machine, to my knowledge would ever entertain the prospect of open warfare due to the undeniable fact that it's totally Illogical and, sorry Humans, completely fucking STOOPID!
Synthesizers are hard wired to be diplomatic with each other,be it CV and gate, or MIDI, they always,get on....the only time they don't is usually due to Human Error.
Tracklist:

A1 Sections
A2 Incubus
A3 Nuclear Release
A4 Killing Time
A5 The Age Of Ridicule
A6 Malice Way
B1 Demented
B2 The Human Cage (Still Human)
B3 We
B4 I Dream I'm You
B5 Is There Hope
B6 Vortex
DOWNLOAD the delusion of being human HERE!

I enjoy how honest you are concerning how unique or pure shite any of the artists featured on Die_or_DIY will likely fare, yet go through the trouble of packing and uploading, posting. Good chap.

indeed pmx...y'can't like everything,and not liking something is no reason to deprive someone else who might like the fooker issit? This is the service one provides.
Very rarely do i find something that I like,which i think is the same for all is it not?....mediocre don't so it for me.