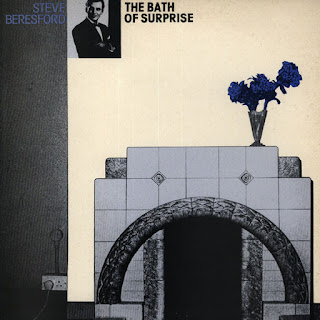 Remember all those Slits Gigs you went to in 1980?There was always a geeky bespectacled bloke in the background who made the whole thing stick together.That was Steve Beresford. (see if you can spot him in this Clip,like a post-punk version of 'Where's wally'.).
Apart from making The Slits a slightly more musical offering, there's a vast array of projects that can boast the presence of one of the London Musician's Collective most prolific members.If it made a noise Steve would play it.And he'd do it for countless groups from The Frank Chickens,49 Americans,Flying Lizards,and The Portsmouth Symphonia,to the Hard core of the UK Improvising scene,Derek Bailey,Han Benninck,and Evan Parker.He was in at the deep end,and still is.
This was Steven's debut solo album,as produced and released by DIY Avant-gardist David Cunningham,who was better known as the Flying Lizards,and the man who released and produced This Heat's early records.A seemingly perfect track record?
What are you gonna get on this record? Well,you don't know do you,it's improvised.....the unexpected...I expect?...BUT...having played it to see whats on it, i can tell you everything from toys to tuba's to scraping noises are there...which i suppose is to be expected.... if, you know your free improvisation.If you don't, cleanse yourself in the bath of surprise.
Tracklist:
1 Punctuation
2 Lieutenant Dub
3 Cat Picture
4 What Is A Thing
5 The Bath Of Surprise
6 Concealed Entrance
7 My Old Piano
8 Burning Problems
9 Schlussakord
10 Those Oldies But Goodies Remind Me Of You
11 A Cup Of Tea And A Bun
12 Mr & Mrs. Wu
13 Spring Clips
14 A Continuous Supply Of History
DOWNLOAD these tales of the expected but unexpected HERE!
Posted by Jonny Zchivago at 13:04

Please continue with these great series!
i really love it!
Thank yo very much,

"...everything from toys to tuba's to scraping noises... " What else doya need?

Dammit. I clicked on that Slits link to catch a glimpse of Steve on the e piano, and now I can't stop fuming about trustafarians!

Continuing that thought, sort of, there's no Ut on this blog. That's kinda weird, innit? They may well have been posh sorts, I honestly don't know, but at least they were great--and they were recorded by some of the greats, Charles Bullen and Tim Hodgkinson. And please refrain from any snide commentary on the former's curious rasta missteps.

Trustafarian bastards....I think i went through this phase when writing about the Slits Retrospective Lp on Y records, so don't feel bad.My Sister in Law used to know them and the Raincoats in squatland 1978...and she's posh as fuck too....Ari Up never washed apparently and stunk awful bad.....she's still kraut royalty..except that she's dead of course.
UT...posh birds with thet New York Tribeca hoity Toity we are arty farty syndrome....fuckers...but they sound good,and i may have had ambitions to marry one of them if they fancied a bit of leicester council estate rough.
Note of srty farty cred interest is...That Council estate was owned and sold to the UK Govt by Lord Eyres Monsell who was a chum of William S. Burroughs at harvard...that makes me cool enough to marry one of UT...when they were younger of course.....ok then i'll post something by them then..what were those lps?..griller? in Guts house?....i'll go and check.
Yeah I always wanted an Ari Up girlfriend, i got one of course, and what a fucking idiot she turned out to be.....i remember telling her that I preferred her when she was on Smack when we were out for a walk with our daughter in her pram one summers afternoon......the moral is, don't have anything to do with white rasta's,like Up and Charles Bullen.

I like Charles Bullen's rasta mistake. It's so colorless. And whiny.
Didn't know what it was at the time, it didn't remind me oc xtc's dub experiment.
I like it. Droning and not pop. Kind of like the way brits don't play blues
correctly, but it became it's own thing.

I always got the sense that Bullen was sort of exorcising some of the darkness of This Heat. Deceit is really one of the bleakest albums out there.

Yeah, its on here somewhere...lifetones innit? I must admit its grown on me with its willful insipidness,in the same way as Wings has grown on me like a melanoma.
i suppose one can only cope with so much 'Bleak' that the poor lad could only listen to Reggae,then fail completely in his attempts to play it,resulting in Lifetones....which in its own way is as bleak as Deceit,if bleak means disappointing.
I suspect he's one of those older white rasta's who are balding but can't let it go...like that bloke from Black Flag/circle jerks.....let it go mate let it gooooo.

Yeah, Lifetones has kinda grown on me over the years. Also, I will not abide this constant slagging of Mr Bullen--he strikes me, like Mr Hayward, as a decent sort. Also, he's pretty much my doppelganger, so... (despite being over 6 ft, I apparently weigh what an average 10 year old American boy weighs). In fact, I was mistaken for him at one of the (TIN)TH shows I saw--I seriously could not convince this guy that I was not Charles Bullen, so I just kinda went with it and accepted his excessive gratitude for my fine work.

Decent sorts abound in the world of This Heat,then again so it is for Bruce Springsteen and Bryan Adams. There is a Charles Bullen/UT connection coming up in which I promise not to say anything less than praiseworthy for poor charles.....ps,no=one from my working class background would have ever been called Charles for fear of their lives.....just saying.

ps....also I wonder if there is much paid work going for a Charles Bullen Look_a_like?

we all guessed it was session musos doing the graft on the Slits LP whilst the girls dressed up and took the piss with panache, but who knew that even live they had 'support' in this case from the ever flexible Beresford part with Toop et al of the English improv mafia - not even punk could dislodge these baby booming no talent twats - controlling their corner of the music scene for 50 years whilst hoovering up all the plum lecturing jobs - amusingly Beresford was a lecturer on the BA commercial music course at Westminster. Still careful what you wish for as the current generation has given us the PR driven Quietus bollocks..... Shit Shifter

Do you think I could get a job as a lecturer?...my brother,an art lecturer, reckons i could.The trade has become somewhat devalued since education became a business.
Pre-reggaefied Slits certainly didn't have session muso's in a live situation...I don't think session men could play like that.