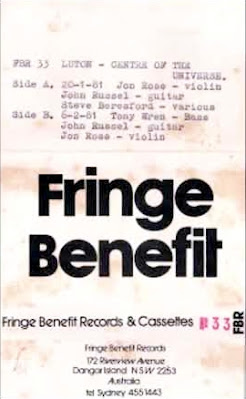 Having proved that there is a super-massive Black Hole at the center of our galaxy;Top scientists are yet to prove that Luton is at the center of anything,let alone the universe.As one of the most drab and uninspiring of London satellite towns,and home to one of thee worst football grounds ,possibly in the entire universe,the place would be greatly improved by being swallowed by a black hole and compacted to infinite density.
Although ,Luton was indeed close to the center of the improvising universe for at least two evenings early in 1981,when Steve Beresford and chums hit town,witnessed by what sounded like,going on the sparse applause,approximately 8 and a half punters,but no dog.....he didn't turn up! Or, better still a room full of paying customers,including one dog, who sat in silence,or left,during the performance,leaving the eight and a half strong Luton intelligentsia to applaud wildly in a largely empty room. This C-60 being the only evidence that this actually happened.....or did it?
These free improvisations have all those essential monkey's tea party qualities that would normally empty any size room of consenting adults within minutes and provoke many a ruddy faced jingoist into enraged foot stamping threats of violence.In which case I could't recommend it more.
Tracklist:
A January 20, 1981 31:03
B February 6, 1981 25:38

DOWNLOAD from the center of the universe HERE!
Posted by Jonny Zchivago at 10:09