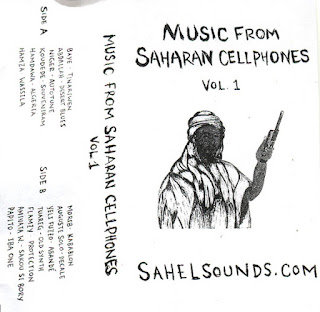 The sound quality of the 'cell phone',as north Americans call them, mobile's for the more sensible quarters of the planet, hits a new low in the recorded medium.If seen on an oscilloscope, lo-bit digital sound capture has the appearance of a block diagram,or brutalist architecture from the Soviet Era so beloved of Vlad "destroyer of worlds wannabe" Putin.He loves the Soviet era almost as much as he does wearing his built up shoes,he being another short arse dictator with a toxic inferiority complex.
This angular sound quality adds a certain je ne sais pas pourquoi,to the pieces involved,and has one imagining a distant horizon sinking below the most distant dune ,and not a person to be seen,except yourself and a 'cell phone' packed with fuzzy desert music from Mali and neighbouring territories who have likely now succumbed to the latest schoolgirl kidnapping antics of Boko Haram.....why is the Earth so full of complete bastards?
As a Stupid White man, I awkwardly find most African music as strangely uplifting as it is incomprehensible to the soul-less paleface.I am often unmoved by such foreign concepts such as 'Soul' music .This, of course makes me feel uncomfortable,being English and raised under the gray skies of misery that imprisons the British Isles.The only way we can assimilate Soul Music is if its backed by Vince Clarke on synthesiser,or a pure expression of misery....in other words Yazoo and Joy Division....that's real white soul music that is.Well..Maybe not Yazoo,you know what i'm getting at(?)as if you are on this blog it is almost certain you are of caucasian origin,but it certainly is NOT the blue eyed soul of such awfulness as Simply Red or Paul Young,and others who simply copy our brethren of colour....I thought I'd end this blurb on a 'Woke' note before i go back to sleep after re-runs of "Love They Neighbour" on me lickle illegal telly-box. The very same Telly-Box on which i just witnessed a crowd of Hungarian school children Jeering the England football team for taking the Knee'!? Makes you just wanna give up dunnit?
This tape is rather flipping good.....having said that,i don't want more than one.....there are another couple of volumes available that should satisfy any guilt laden Honky very nicely indeed.
WARNING!: severe danger of White man dancing in the area!
Tracklist:
A1 - Baye - Tinariwe
A2 - Abdallah - Desert Blues
A3 - Niger - Autotune
A4 - Koudede - Souveniram
A5 - Hamdawa - Algeria
A6 - Hamza Wassila
B1 - Morib - Kabablon
B2 - Auguste Solo - Decale
B3 - Yeli Fuzzo - Abandé
B4 - Tuareg - Old Synth
B5 - Flamzy - Protection
B6 - Aminata W. - Sakou Si Bory
B7 - Papito - Iba One
DOWNLOAD to your cellphone cell block HERE!
Posted by Jonny Zchivago at 15:03

Thanks very much for this and so much else (I knew someone who was in a band with one of Fuzzbox for a bit). To counter HUNG. SCHOOLKIDS CYNICAL MOCKING, PERHAPS THEY OUGHT TO TAKE A sideways LEAF (or should I say, Leg?) from your Angry Dan's book, and in place of kneeling, nail Jelly Trousers to the pitch, for peace, racial purity, reason and freedom ... Trouserfixion now!

Oooh, delicious *and* suspicious... I thank you, JZ!

This is rather wonderful innit?
Ta muchly.