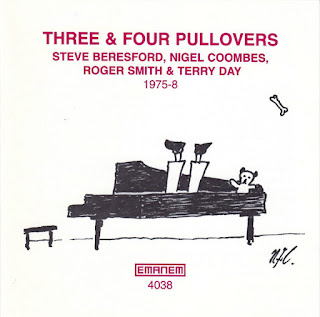 What were you doing in 1975?
I was enduring the transition from primary education to take my place in the final year that Grammer Schools existed in the UK.Soon to be phased out because the Labour Government thought it 'Elitest', Unlike the government? Shirley Williams was the Secretary of Education,who had the non-elitest luck to have been evacuated to California in World war 2, along with her mate Elisabeth Taylor.They both tried out for the lead role in National Velvet.....and guess who won? That's right, Not Shirley Williams,who channeled this bitterness to fuck up intelligent kid's education prospects with her 'socialist' values,which, as far as i could see, were designed to keep the working class in their place,as factory and family fodder.
So in between being beaten up at school by the older kids,....us being the last years intake....we would never get the chance to beat up the younger kids,so we were doomed to be the youngest kids for the entire 5 years.
Then, carrying the stigma of being a Grammar school kid on a council estate, I was beaten up on my home turf too.For some reason being classed as intelligent means that you are 'Posh' according to my peers,who named me "Posh Cunt" before the kicks tained in....that's elitism for you alright.Pablo Picasso never got called an Asshole...but we did.
In between kickings, I spent my time listening to such unadulterated rubbish as Queen, Status Quo,Dr Feelgood,Thin Lizzy, The Sweet,The Glitter Band....etc....you get the picture? With pretensions towards Prog.
Meanwhile Steve Beresford and his London Music Collective chums Nigel Coombes and Roger Smith were making ,such crazed improvised tomfoolery as "Three Pullovers".....(later expanded to "Four Pullovers" whenever Terry Day bothered to turn up).
What would have been rather splendid,was if Thin Lizzy played a version of "The Sea Of Mice" by Three Pullovers as an encore at one of their proto-NWOBHM gigs,even though Sweet were far more metal than them.The mid-size college arena would have emptied in record time...well, either that or a Riot.
The Glitter Band are excused,as their Guitar sound was probably the most avant garde statement in the whole Glam scene. Dr Feelgood were living art however, but The Quo could have at least finished their 'Blue For You' album with some Free Improv to totally piss off their denim clad,and 100% male audience.....this could have been lauded as another one of those, sadly stupid "Punk before Punk" moments. The fantasy of the late Rick Parfitt whipping out the toy glockenspiel would have made for a most tantalizing prospect.
Its the Toys that make the Noise. 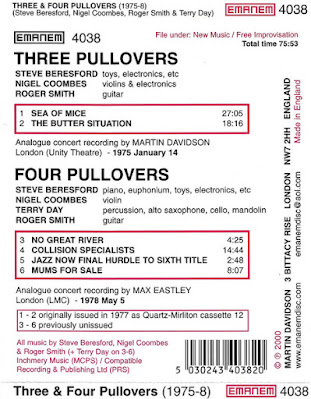 DOWNLOAD and pullover HERE!
Posted by Jonny Zchivago at 01:11

Jesus. I was a few grade levels beyond my age group, but as I was unusually small and young in appearance and I was (and remain) rather retarded with respect to social/emotional development, the brilliant solution was to _sit me in a fucking corner_ and have me work independently--throughout most of my primary and secondary education-- rather than to simply advance me a few grades. I don't really harbor any resentment towards my mother--she was seriously overworked and underpaid, and she was rather unwell, to boot, owing to an autoimmune disease--for not finding an alternate schooling scenario, but... yeah, I really wish she had. The only upside was eventually being offered full-ride scholarships to the finest and priciest unis in the land--where I discovered that despite whatever academic pretensions, the "best" unis in America are still somehow inhabited overwhelmingly by the filthy rich.

Somehow I managed to mostly avoid the beatings--the epilepsy thing (un-dx'd at the time) made me kinda "scary" or something, I guess--but I was persistently tormented in other ways. I've never really done the "sympathy for fellow humans" thing all that well, but I really feel for kids who are "special" in some way or another and who are totally isolated from their peers. To this day, schools (unis are fine) terrify the shit out of me.

Yeah, it always amuses me when american's refer to Britain's social structure with a smirk of amusement,suggesting that it could never happen in America. A country where multi-millionaire dynasties move in and out of the Whitehouse on a whim.Where health care is thought of as some communist plot.Where ,if your daddy hasn't got a few million in the bank you is fucked.The world's largest economy,with more poverty than you could shake a stick at.
Educational institutions are awash with awful rich kids...same as the UK now,a growth industry....burdening the poor kids with massive debt,leaving campus with a low paid job and a degree in Debt slavery.
Never mind ghettoizing the 'Special' ones in society,keeping their dangerous ideas away from our future leaders.
Wouldn't recommend it.
Personally i gave Uni a miss and went straight into being a hunter gathering artist...all made possible by the misunderstood Margaret Thatcher;she did more for us scum than any Labour or 'liberal'Tory ever did.Saved us from the mines and factories,plus, I got out of it debt free and never needed a job.....you can't do that now.

Yep, Blocked indeed...because of Copyright infringement!?...i may switch it to mediafire or Mega. It seems that Google are having to show that they are serious about blocking copyright infringers...everything Fripp got removed/blocked yesterday.

And not available for love. Or money: http://www.emanemdisc.com/cd-2gen.html#4038 . I know Steve a bit, lovely guy, I'm sure he wouldn't mind.

I've put the file of this deleted/not avaiable CD on Mediafire...see how it goes.