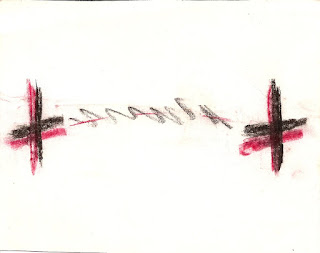 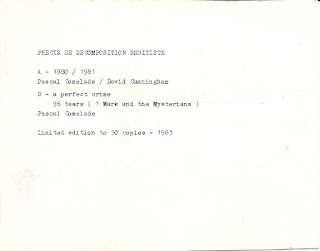 Somehow we've found ourselves back in France thanks to David Cunningham's association with minimalist composer Pascal Comelade, and this cassette of decomposing noise. I don't know if this was decomposed at the Cold Storage Studio,but there is definitely a This Heat factor floating around here. Comelade did in fact have a minimal pop band named after a this Heat track as further evidence,"Fall Of Saigon",although how much they were actually an influence is up for debate. Comelade did go on to develop a very attractive minimal Satie-like method of tune writing,which reminds me of former This Heater Gareth Williams' fantastic solo album "Flaming Tunes" from 1985.....so one suspects the influence was indeed a two way street.
Comelade had a predilection for deconstructing pop tunes,sometimes slowing them down to a crawl,or reducing them to the barest of bones or, as in this case with ? and The Mysterians' garage classic "96 Tears",a slow decent into a fuzzy fog ,which i think was a consequence of another of Pascal's major influences 'Suicide' rather than Question Mark himself.
Coincidentally, it's apparently Pascal's 67th birthday tomorrow, how's about that for synchronicity?
Tracklist:

Face B:
A Perfect Crime/96 Tears
DOWNLOAD another reason to forgive france for Johnny Hallyday HERE!

In fact J H only became belgian to avoid taxes...his dad was belge apparently.
Everyone who's famous in France turn out to be belgian in the end...like all famous persons in the USA are actually Canadian.

Pascal's an old favorite. Haven't heard this one w/ David, so thanks for that. It must’ve been the ‘ltd.edition/50 is all we can afford/reissue?/right, sure’ sort of thing. Agreed, lots of famous USAers turn out to be Canadian, while most of the infamous reprehensibles are home grown right here in our, shall we say, nutrient rich soil. Rekkin' they call us yanks for a reason...

I hear God is big over there in the USA.....maybe he/it/she/them are Canadian too.But he's (etc) bit too impolite to be from canada.....unless its the french bit.....or are they Belgians too?

Monty Python's take on Belgian's was - well I laughed.
Blog with much excellent belgian cassettes is no longer forgotten music (http://433rpm.blogspot.com) which i recll seeing in your GOOD BLOGS R US........? list