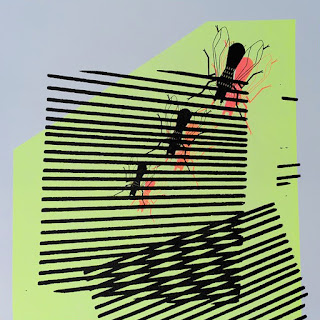 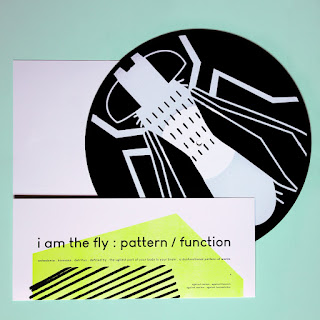 Any Synth punk duo from 2022 must be encouraged don't you think?
Are they actually real flys...or are they wearing masks ? We may never know,but what we do know is that they come from Germany....Mulheim apparently,formerly from Essen...so no more jokes about eating or My illegally carpet bombing the place(Essen)father during the European war before this one (he never liked us kids calling him a war criminal)...now it seems that we were on the wrong side.It might have been our last chance to stop Putin,and his gangs of thieving murdering rapist thugs.
The six songs on this very attractive single sided Lp do all actually sound like the same tune on repeat,in 4/4 marching time,with the Boy fly bassist playing at least one note  per minim; but, why change something that works just for the sake of melody?
The Lady Fly treats us to a buzzing organ reminiscent of the buzzing organs of The Screamers,backed up by a vintage drum box  which sounds like a Robot-Billy Cobham compared to the classic Suicide drum ,machine, if that's what it was? A respectful nod in the direction of the Synth Punk founding fathers is required,keeping the legacy alive and hopefully encouraging the Yoof to pickup a crap organ,fuzz box,shite drum machine and sing about something other than breaking up with their Girlfriend.
Dunno if the two fly's involved are indeed Mrs and Mrs Fly, hope so,as doing stuff like that is genuinely subversive behaviour.....as for maggots, there is a chronic insect shortage going down,something like 80% down on the Insect population since the first Synth-Punk group released an album.
And remember, No Insects= no trees,no Flowers, and...slightly more important....No food!
It also sounds like these Flys are 'Woke'.as these right-on flys,depending on which of their six knees to take, display the following claims rather proudly on the sleeve..
"Against racism
Against Fascism
Against Sexism
Against homophobia"
Strangely all things I have been accused of ,among many others, In the hallowed pages of this blog over the years.
As these grown up maggots are trying to sell some product to you DIY enthusiasts,i will not be making anything available for fuck all as one usually does....an action that some irate punter labelled me as....wait for it..."Pure Scum" recently.
Instead you can check out buying one on their Bandcamp page,click here or see below.....:
It's good, and you don't even have to turn it over to play side 2,mainly because it hasn't got one!
Video HERE!
Tracklist:
1 Anhedonia
2 Biomass
3 Detritus
4 Defined By
5 The Ugliest Part Of Your Body Is Your Brain
6 A Dysfunctional Pattern Of Wants
BUY ONE like flys on shit or fly with hits HERE!
Posted by Jonny Zchivago at 19:31

Email ThisBlogThis!Share to TwitterShare to FacebookShare to Pinterest
Labels: 2022, Germany, I Am The Fly, synth punk

I guess being labeled pure anything represents an achievement, perfection of a sort anyway, so you can now die happy, secure in the knowledge you reached nirvana in life. Better pure scum than a half-assed saint. If my 5 quid perpetuates this sort of dreck, then perhaps I’ve achieved something?

Hmmm, who is the patron saint of the Arse?....i should the majority of religious icons enjoyed a bit of arse fun....mostly raping and killing young boys mainly.
I always harbored ambitions to be like my hero from Ren and Stimpy..."Flod, the perfect cube of Fat".
My mum always told me that there is nothing I cannot aspire to be. Dhe wold be proud to know i have attained Pure Scum status.
What did you want to be when you eventually grow up Rev?

"Strangely all things I have been accused of"........hahahahahahaha. Same.

"Against racism
Against Fascism
Against Sexism
Against homophobia"
That's not daring. Daring
would be if the last line
was "For homophobia".
or (except for the Jews) was after Racism.
It should just say "I claim the same beliefs
you think you are supposed to".
But, if you're so enlightened, why do you have to mention it.
The Beatles never had things like "We are against killing people" and "we
do not believe in physically harming youngsters with rusty pointed things"
on their albums.
Maybe it should have said "unlike you..." right before their manifesto.