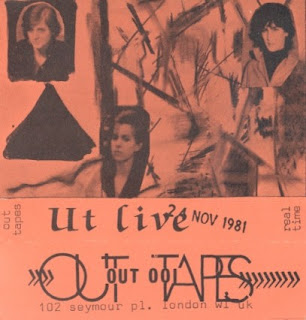 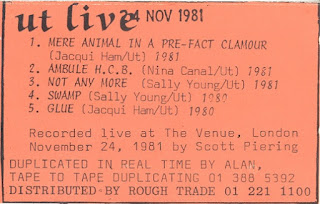 A tangle with the DCMA(Copyright protection shit) has left me upset and directionless.It seems that some corporate entity has Steve Beresfords back, so this leaves me no choice but to act on a recent suggestion as to "Why No UT?".....also 'Cut Hands' was put forward...but that's William Bennett,and the same reason exists as to why there is no longer any Whitehouse on this blog......although William was very polite about it,so I complied like the pop stars bitch I am.
I am sensing another crackdown like that last seen in 2012,so it seems that every decade we get some shit....I have it all backed up ready.
I suppose UT are No wave are they not? I am told that the tunes,or No Tunes, are improvised behind the words,which are not???? Why?
Apparently, not having actually seen UT live, they were well known for long..."Artistic"....discussions between pieces,as to who plays what and what goes where. I suspect a reluctance for rehearsal time here.
The sound quality is very good.Obviously taken from the sound-desk,and,as proudly displayed on the cassette itself...."No Dolby".....I am tempted to do some Spinal Tapisms here,but will refrain...but its true innit...You don't do heavy metal in Dolby!
I don't really know if UT were posh girls from wherever Posh Girls come from in the USA,but i suspect it is so. I am reassured by my reluctance to Google to see if they were actors, like Mars were,which is a real turn off.Do these people know real pain? The music suggests they do if you listen with your mind.The juries out,and the verdict hasn't been corrupted by exposure to media sources,mainstream or alternative.The pop'n'rock world is littered with fake news,which is all part of the myth that makes it all so much more enjoyable.The right wrong facts make it all so much more ....well...y'know? Somethings are best left unsaid....They're Posh alright! Not quite at Marianne Faithful levels but enough to ooze art schooling paid for by rich parents.If that qualifies at all as Posh?
The politics of Envy are big on these shores,but i don't envy being dismissed as Posh....which of course I have been back in the fertile seed beds of my distant youth,where the weeds grew woody and bitter,and no-one is allowed an escape route by the fellow inmates.
So i think that all means that UT are good.
DOWNLOAD without dolby HERE!
Posted by Jonny Zchivago at 09:23

American universities are a bit confusing to non-Americans. There are a fair number of state art schools that are either free or reasonably priced for residents. However, the names are often misleading--for instance, Rhode Island School of Design , despite it's name, is absolutely NOT a state school and it is seriously overrun with the filthy rich. Could never get a good read on UT--I'd need to actually _see_ them for my spidey-senses to work (or maybe learn how to use that google thing).

Also, thanks for the live UT! It may not blow my mind like that This Heat--Krefeld 1980 tape loaned to me by a coworker waayyy back in the day, but then almost nothing does anymore. The first Black Country/New Road album is pretty damn good--way better than Black Midi (though their drummer is great)--just not mind-blowing. I almost feel as though it is incumbent upon me to produce that mind-blowing work. Am I up to the task, or even capable? Absolutely not.

Yeah well every downloaded copy of those powerful improv tapes translates into a $20 lost sale. It's just like going into record stores and stealing the tapes from the shelves! God knows how many millions of dollars have been stolen from poor Mr. Beresford.

Its more like every downloaded copy translates as another person who would have NEVER listened to,never mind bought,or heard of,a Steve Beresford record. Copyrighting music is the equivalent of copyrighting oxygen,it just ain't possible especially nowadays. Playing live is now the option....you know....working? And $20 lost income per lost sale is dreamsville territory,maybe 50 cents to break even.

@passikon.....thanks for the link. Only recorded thirty years after this tape....how time flies?

Did you actually miss the dry sarcasm in my post? Tsk, tsk. And you're English!

snoopy,
I actually answered with pure post ironic metaphor.Taking on the role of arsehole blogger trying to justify himself to Mr Angry record snob and part time musician.
You're barely out of sarcasm kindergarten sonny jim.

1. snoopy, you are certainly and demonstrably right! he's not really english, he's from Leicester. in the sarcasm trials of the mid 90's he was convicted and deported to France. it would have been Australia like the good old days but money was a bit tight in those days ... not like now, mind.

2. passikon, legend mate. thanks for the live recording, would never have heard that otherwise.

3. who the fuck is steve beresford?

4. UT are a great band that i haven't listened to for a while, so this wins all the way down. i saw them in the late '80s (maybe early '90s, my brain is pickled so who knows?). i've got a hubble sized class war / bullshit detector and they passed the scrutiny with flying colours.

The republic Of Leicester thank you very much....but it is correct that i was deported to France due to my own stupidity I'll admit.Brainwashed by telly programmes on how cheap it was to buy a lifestyle...cyber deportation i think they call it.
But, Badgerstump is obviously bitter that he's not as 'talented' as me;) plz note the quotation marks,as that word came from the Stumpster himself....who some years ago was sentenced to life in Manchester for being a smart-arse.

let's be clear about Manchester, there ia an annual interrogation that you need to pass in order to stay here. if any of your answers don't start with "what the fuck has that got to do with you?" it's an instant transport to the east midlands.

we even have an entire part of town to deal with smart arses that make your arse smart ...

Thanks as ever JZ, excited to get some UT. Re: Beresford's back, what the hell? Amazes me when these people actively try to stop the music getting heard...