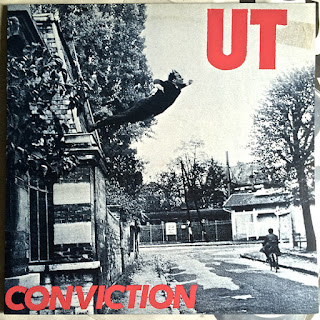 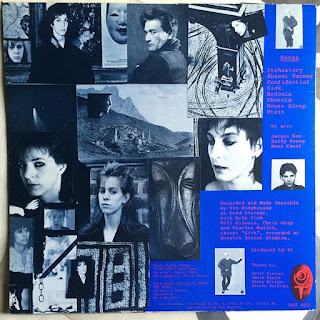 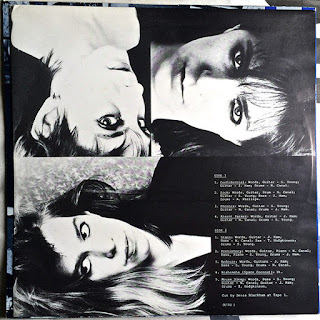 UT recorded at This Heat's / David Cunningham's Cold Storage facility shocker! Recorded/produced by Henry Cow chap Tim Hodgkinson,who contributes his nefarious saxophonal abilities,as well as some dodgy drumming.....all assisted by all round 'decent chap' Charles Bullen,late of This Heat. You may even notice,Tim's ugly fizzog displayed on the cover surrounded by pretty avant-garde rock chicks looking moody and existential;or is that Antonin Artaud?...also looking moody and existential...he was an Ac-tor you know.I also suspect that our fun chum Antonin is the fellow in an unfortunate postion on the cover too.
It seems,even experimental avant-rock No wave music never fails to cash in on having a pretty lady on the cover at the slightest opportunity.
At the risk of being brought to tears by a mob of livid and shouty vegan lezzers I must approve of this brazen use of female imagery as bait for the casual male music nerd to chance an arm on....or at least a wrist?
As jolly good UT are.....i think they are still going sporadically?....they seem unappreciated in their native lands,never gaining a release there from a US based label. Brits always like a less successful in america american looming on the local scene don't they? And dismissing them as Avant-Wank fodder is a trifle disingenuous of me....but funny.However, this debut Lp doesn't quite reach the dizzying heights of their later work .....don't get me wrong,it's still jolly good,it's just that there was better to come....oh alright I fancy them too.....they have pulses don't they?
Tracklist:
1.Confidential
2.Sick
3.Phoenix
4.Absent Farmer
5.Stain
6.Prehistory
7.Bedouin
8.Kcahsmahs (Spare Coconut)
9.Mouse Sleep
DOWNLOAD out of cold storage HERE!
Posted by Jonny Zchivago at 14:30

I never heard UT before - hey "better late than never". The live concert from london nov. 1981is a bit more raw and it seems to represent an earlier stage of their music development. i like them both.

thanks a lot for these ones and all your work here.

Rumor has it there's gonna be one of those biopic miniseries on the Cold Storage years, made for one of the streaming services that hasn't banned people from smoking on screen yet--I'm hoping for a central role. Or maybe I just started said rumor, but I can always dream?

I've already signed up as David Cunningham.Looking forward to the Flying Lizards on Top Of the Pops part. Like that sex pistols series, i will be involved romantically with one of the Frank Chickens and an unrequited love affair with Danielle Dax keeps the viewers guessing as to whether anyone at all bothered to see if this absurb nonsense was anywhere near true?
"Pistol" was a pile of total tosh,but i still got excited watching it? Why is this?
Who are they gonna get to play Charles Hayward?
Anyone fancy forming a This Heat Tribute band called "This Shite"?

I've always imagined Popeye as Charles Hayward, but I don't think he's real. I only got half-way through the second episode of "Pistol"--I didn't think the guy playing McClaren was sufficiently annoying enough.

I'm not ashamed to admit that I've done both a This Heat cover and a Camberwell Now cover at one point over the years. I'd like to do SPQR--I think I could do better than Oneida and Sleepytime Gorilla Museum. It seems that only the Japanese really do tribute bands of more "underground" acts (apart from Wire). I don't know why that is, apart from some sort of weird stigma amongst "cool" types about doing even remotely faithful-to-the-original cover songs. However, Keith Levene and Jah Wobble did a tour some years back with a cheap Lydon clone. That was weird.

PiL are touring right now with what seems to be a terrible Lydon clone that by all accounts is very well paid.Really bad.
Waiting for that Japanese PiL tribute band that limits itself to the first 3 Lp's.

I wasn't familiar w/ UT before now. There's something I really liked but couldn't quite put my finger on. Now, seeing all these 'famous to me' names, it's starting to make sense. Thanks for shrinking my ignorance.

mate, have a word with yourself ... of course Charles Hayward is real! he's the gorilla in the chocolate advert.