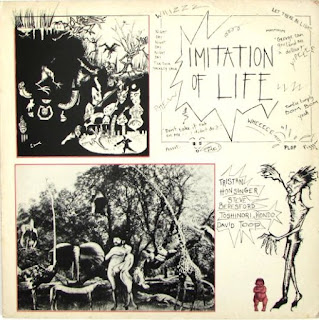 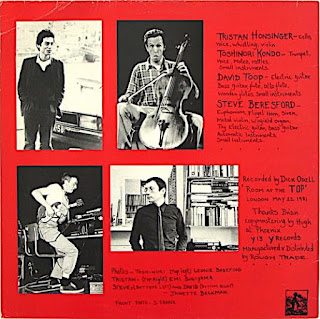 Having been seen doing the donkey-work for the Slits it was inevitable that Steve Beresford would get some product on trendy Pop group connected label, 'Y Records' ,as owned by Pop Group/Slits manager Dick O'Dell. So, Steve and his weird London chums got to do a couple of Lp's of their spontaneous scraping toy instrument and Tuba madness to sit alongside the funky fayre of the Bristolian Illuminati. Unlike label mates Maximum Joy*,Poop Groop, and other suspected Trustfund surfers,there is not one ounce of 'Funk' on Steve's record ,which hardly even has a time signature.It does have however,four very unfashionable people living in four different but related worlds,playing different tunes at the same time.
NB...Maximum Joy threw a mardy*......

*Mardy Arse :(noun) INFORMAL•NORTHERN ENGLISH
a sulky, petulant, or grumpy person.
......about being featured on Die or DIY?,and demanded...yes...demanded(?)  that their work.....did they say 'Work'?,apparently ,yes?...be withdrawn.....so you can't find these suspected suburban  middle  class George Clintons haunting these pages no more.;...but you can,ironically, on YouTube,work that one out......or as Steve Beresford calls it, YouTuba! (ha ha ha)....i suspect it was Dick 0'Dell (who produced this funnily enuff!) wot done it,not the groop.Groops don't do shit like that,unless you're the remaining members of Throbbing Gristle,Cabaret Voltaire,Whitehouse,or Zoviet France?...There seems to be a theme there.....only Industrial Bands are wankers it seems.
Anyway fuck the fuckers and their honkyfied white mans funk, And how dare they share the same label as Sun Ra....yeah I'm a trendy too?Didn't you know?...how Dicky dingleberry O'Dell wangled that I dunno?
Well, at least Y Records have an ex-XTC member (barry) on their rostrum;...yeah,post-punk super group Shriekback's entire fun-filled oeuvre appears there.......not listened much to it however,,only that first single about a spine being a bassline or sum'ting equally cool,as in cool with a capital 'I'...don't care. Nah!
But, Beresford can't do anything wrong to this proudly closed mind,I just don't like Trendy's who'll reveal their under arm portable jazz collection before you can say Thelonius Monk;arranged in chronological order of course;the More Jazz than You Nerd off......yeah yeah I know.....I'm "Pure Scum" etc etc....! for stealing the royalties from these hard working bands blah blah......I wish I could get royalties from work I did 40 years ago, or sell copies of the same work again and again...and incredibly, no-one complains???
Tracklist:
A Whoosshh 21:16
B Please - Thanks That's Alright 17:34
DOWNLOAD the x,y,and z of how and why not to be a funky honky HERE!
Posted by Jonny Zchivago at 21:48


The Beresford bender continues, enjoying it a whole lot! The Pullover sessions are a riot, never heard them (or of them) before.

Since we got a link of Beresford playing live with the Slits ... here he is on stage w/Mark Stewart and the Mafia a few years later: https://www.youtube.com/watch?v=Soafl6Mb7TA&ab_channel=GazelyGaze