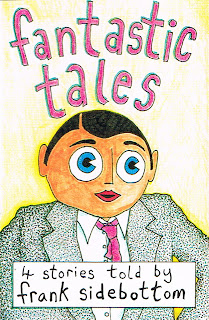 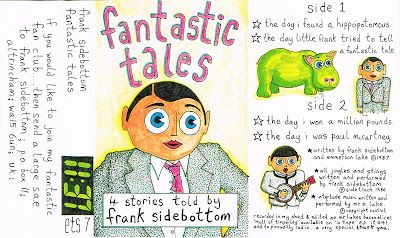 The sparkling and magnificent sub-celestial abode that some would let it be known to all and sundry as being called thee planet earth;hasn't always been the stamping ground of official top ten entertainment and egoistic posturing.Around the golden era of rock'n'pop'n'roll, 1977 to 1984,there lurked an unpopular form of  rock'n'pop'n'roll called alternative and independent music.There was even some clever individuals who did all that stuff what top-notch mangers like Peter Grant and musical behemoths such as Richard Branson did, themselves.......clever little smartarses such as they were. One such clever smartarse would be Chris Sievey of the alternative and indie rock'n'pop'n'roll group The Freshies,who did everything himself,released lots of unpopular pop tunes on his own label,and to cap it all, in his spare time was the very very funny alter-ego Frank Sidebottom,who lived with his mum in the charming satellite town of Timperley near Manchester.
There was ,excuse my language, a fucking shit film wot i was swindled into watching called "Frank",which has been described by person's unknown, as a "Black Comedy"?....supposedly inspired by Frank Sidebottom; who,i am told gave his blessing to the project before he died..he'd be spinning in his grave if he saw the finished product...Did I say that Frank and Chris were indeed both dead at the time of writing?....no?...well they are. I heard this nugget of movie propaganda and proceed to watch an illegal download of said talking picture,only to learn that the Frank in the film was nothing to do with the Sidebottoms of Timperley,but was some clueless american in a Frank Sidebottom head moaning about how hard life is,and spouting  too cool for skool nonsense about what makes a cool band and that which is not.There has never been,to my knowledge any rock themed movie ever, unless its taking the piss of course(Spinal Tap),that didn't......(i stoop to americanese again..sorry)...Suck Balls real bad.......maybe "A Hard Days Night",but that was more an Ealing Comedy with Pop Stars in than a rock'n'roll movie?
Rule one never ask an american what makes a punk band, they just do it naturally without thinking about it,unless you're Johnny Ramone. Rule Two, don't break the eleven commandments of Rock.....which the band in this exceedingly crap movie do with ease.....they had a keyboard player for Jehovah's sake!?....there are exceptions for this of course,like Una Baines for example(mk.1 Fall),but generally its an idea that...in Americanese....SUCKS! It really makes one just wanna give up.
Frank,However, had the history and meaning of Rock'n'Roll tattoed on his papier maché head
No this film wasn't about Frank...but there is another one that is....more a documentary than movie,but better...."Being Frank" is the titular conclusion for that one.
So as an introduction to the showbiz genius of Frank Sidebottom,Little Frank, and the late Chris Sievey,we bring you 50 minutes of the surreal madness that was Frank and Little frank,interspersed with some very silly songs,to remind the world what it's missing......acktuleh!
Tracklist:
A1 The Day I Found A Hippopomous 17:50
A2 The Day Little Frank Tried To Tell A Fantastic Tale 6:06
B1 The Day I Won A Million Pounds 13:29
B2 The Day I Was Paul McCartney 11:28
DOWNLOAD this fantastic tape here ACTUALLY!
Posted by Jonny Zchivago at 19:01

I, being a SUCK BALLS American, really liked the movie Frank. I didn't know nor care if it was an accurate portrayal of Frank Sidebottom.

It did however start me on a journey of discovery as to the "real" Frank Sidebottom who turned out to be unreal, but not as surreal as Chris Sievey. Without the movie Frank I never would have found Chris & his great musical journey.

I have seen Being Frank numerous times & really enjoyed the "true story" of Frank. I've gathered everything of Chris' that I could get a hold of, so thank you for this.

Are you the real Zodiac Killer?
The aspect of the movie "Frank" leading a poor american ignorant of Frank Sidebottom to the actual Frank Sidebottom, actually warms me to the continued existence of this movie that sucks balls. I got a few things Sievey in the offing,so hope there be something that you don't already have.

Jonny, I remember Frank turning up regularly on Saturday morning kids tv, I enjoyed his brand of surrealism then, and so a few years later when he was at Reading Festival, I tried to see him playing, but he played in a big tent and you couldn't see much, if anything and I was really drunk.
I was lucky however to see Frank live in a small venue a few years before he died and it was wonderful.
I've never heard of this recording, so I thank you, I reallllly dooooooo!

Fantastic actually Mr Bambi. I have vague memories of Frank going on Tiswas? But there appears to be no evidence of this anywhere!?
A sad loss,but there is so much Frank material out there that he's probably more famous now than at his peak....maybe?

PS Bambi...i have a short recording of Franks appearance at the Reading Festival...coming up very sooon.

'Frank' was a hybrid of Jon Ronson's memoirs of being in the Sidebottom band and an awful attempt to emulate the mythical Beefheart 'lock-the-band-in-a-cabin-for-months' experiment that produced Trout Mask Replica. Shame on the scriptwriters. Watch 'Being Frank' instead.

Jonny, I just checked, Frank played Reading Festival on numerous occasions, I went to his first one in 1989. After that, Reading Festival didn't appeal to me, Starship/Meatloaf the year before was famous for both bands being 'bottled'. I look forward to your recording.

I went to see Frank once at a small club near Timperley. There were less than a dozen of us in the audience but nevertheless he still performed for over 2 hours, invited every one of us up to the front and gave us all a present. Still got mine: Little Frank's body (made of cardboard but who cares). Thanks for this.

@ Bambi...It just so 'appens that the Reading Festival in question was indeed the 1989 one...now posted.

Dear Aggressive Rhubarb, I envy you.

Haha, please don't. Nothing else about my life is enviable. :)

Surely you're not suggesting that Stardust (David Essex's second finest moment) sucks balls? This is an outrage, sir!

PS Unfortunately I don't think Frank ever topped his first 7", Frank's Firm Favourites.
Everybody knows the best records are released on major label subsidiaries (you know they are, they really are. Thank you).

Nothing David Essex does sucks balls......including, contrarily, Stardust.
Point conceded ,but I am renowned for sweeping generalizations...lets just say that 98% of all rock themed movies are absolute shite and suck balls baaaad.

Anonymous....how dare you!?.....he did a rather good shared flexi-disc once,with a splendid 'indie Medley on it once upon a time,that rivaled firm favs....joy division and smiths covers etc. Frm Favs did get an self-release too i remember, on cassette.

Many fanks for these Franks!