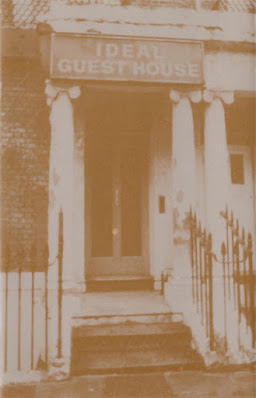 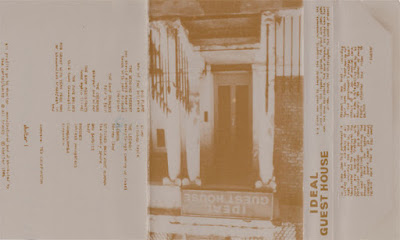 As I received a request for a Ron Johnson compilation,it reminded me of the official comedian attached to this shambling Ron Johnson style stuff, Ted "I was Walking Down the Road" Chippington. I'm not sure if he was into this kind of popular music,but he was enlisted to be the compare of this trendy compilation cassette to support homeless charity "Shelter"; which is rather apt as we are facing the largest homeless crisis in Europe since world war too. Its time to start world war Free (dom) innit? I am of course referring to the current Invasion of Ukraine by that nice Mr Putin man....just in case you are part of the uninformed majority,or living in Russia....in which case i have to inform you that your army has been committing War crimes against your Slavic brothers in the west.....basically you're fucked.
The drole monotone self-elected worst comedian in the world ever Ted,links together a bunch of shambling C86-era,Johnson related groups in his characteristic stoic manner...at times he's even funny!?
Its got Bog-Shed and bIG fLAME on it, what more could you want or need?......just ignore the Chumbawamba track,...oooooh, they didn't like Neil Kinnock.....edgy stuff not, nuff said.
Tracklist:
A1 Big Flame– Man Of Few Syllables
A2 The Wedding Present– You Should Always Keep In Touch With Your Friends (alt Version)
A3 The Soup Dragons– Fair's Fair
A4 The Creepers– Sharper And Wider
A5 The Shop Assistants – Home Again (Live)
A6 The June Brides– This Town (Accoustic)
A7 Rob Grant with Yeah Yeah Noh– Mr. Hammond Has Breakfast In Bed
B1 Stump– Kitchen Table
B2 The Legend!– Everythings Coming Up Roses
B3 Pigbros– Barren Land
B4 Stitched Back Foot Airman– The Deadly Spore
B5 BMX Bandits– Sad?
B6 Bog-shed – Jobless Youngsters
B7 Chumbawamba– Kinnochio
DOWNLOAD and give these tracks a home HERE!
Oh Yeah!...here's that Ron Johnson sampler LP "The First After Epiphany" that i mistakenly thought had no exclusive tracks on it, and you could get them from the other official releases on the blog if you search for Ron Johnson Records. I was wrong, There's at least a Twang! track that one can't get elsewhere,and maybe an errant Splat! number,or anything else with an exclamation mark in it's name:
Tracklist:

A1 Splat!– Mistook
A2 Big Flame– XPQWRTZ
A3 A Witness– Dipping Bird
A4 Stump– Big End
A5 MacKenzies– Man With No Reason
B1 The Shrubs– Blackmailer
B2 The Ex– Knock
B3 Twang – Here's Lukewarm
B4 The Nose Flutes– Bodyhair Up In The Air
B5 The Great Leap Forward– Drowning Speechless
B6 Jackdaw With Crowbar– Crow
DOWNLOAD this epiphanal moment HERE!

That was fast, thanks! I have most of the singles/albums, but had been wanting to hear the exclusive tracks (i.e. Twang!) on this. Cheers, M.

thanks for this! my copy of epiphany looks like some cunt has eaten a bacon sandwich off it...and sounds like said bacon frying