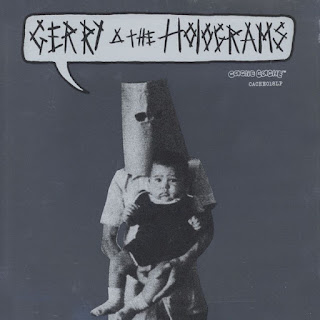 Blimey, just when you thought the well was dry, up pops a lost album by Absurd records' Situationist-indebted masked art-eynth studio duo from Manchester,England...Gerry and the Holograms!
Yes the very same Gerry and the Hollograms who released a conceptual and unplayable anti-record in that nutty situationist art tradition so beloved of Malcolm Maclaren. Each record came glued into its picture sleeve, rendering the disc completely unplayable ,called, if i'm not mistaken "The Emperor's New Clothes" .Oh,those wacky but anonymous Krazy Kats.
Q: How many Situationists does it take to change a light bulb?
A: If 'changing a light bulb' is already in everyone's head, why do it at all?
Like The Residents, the veil of secrecy has now been stripped away, revealing  Gerry to be none other than that bloke and resting actor,C.P.Lee from  satirical rock band  Albertos Y Lost Trios Paranoias;and ,it says here,electronica excursionist John Scott...yeah... THAT, John Scott?!
More Residents references were abound on their only ,playable, release on the great Absurd Records,in 1979, "Meet The Dissidents"......Meet The Residents?....Geddit?
Of course CP Lee made a career out of making subtly satirical piss takes of many genres that were easily confused with the actual  targets of their biting wit. like the "Snuff Rock" EP which was punkier than most of the 'real' punks,and had a track covered by the Damned no less("Kill"); Another song of note is their Status Quo pastiche,"Heads Down No Nonsense Mindless Boogie", a fine tune.
It's basically a tongue in cheek version of the synth-duo's/groups that were gaining popularity in 1979,and without knowing what we know, this stuff could easily have scraped the bottom end of the charts had they been on Virgin,and not Absurd Records.
The unplayable single makes its debut appearance on track 8 as two minutes of silence...so don't think your media player is fucked 'cus its only dem zany situationists innit,reaping havoc with your reality.
Q: No,Really, how many Situationists does it take to change a light bulb?
A: Zero. They all have day jobs, or classes, are at the café, or are expelling each other - and find lights inauthentic.

Fantastic post. I sure as heck wasn't expecting this "group" Thank you.

Anything Albertos related will do for me. I saw them once, the week Elvis died, at a free festival in The Netherlands, supporting VdGG. The vocalist - CP Lee? - said, "here's our impression of Elvis", at which he clutched his throat, and with a strangled gargle, fell over. It's the only moment of the entire day i can remember (another mini-tragedy in my life to match being at Knebworth in '75 when Beefheart played, of which i recall not a jot.)

Memories are more poignant if you can't remember them...but then again i also say that memories are the best photographs....but wow vdgg in 1977....thats around the name change time innit? I guess Albertos would have done those snuff rock tracks?..... a theatrical evening for non-punks.