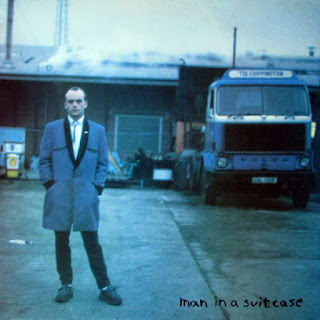 "I was walking down the road the other day, this chap comes up to me; he says, "I've just got back from 'Nam." I said, "What d'you mean mate, Vietnam?" He says, "No, Chelt-'nam"
There used to be a TV series called the Man in a Suitcase,made by the same folks (ITC entertainment) who did The Champions,Department S,Randall and Hopkirk(deceased)and the like. Endless fun was had watching all this stuff the second time round in the afternoon TV schedules  when I made the fatal error of working from home in the eighties;which roughly translated, means watching TV all day with me mates.Luckily I was on benefits at the same time(illegal),and lived at home with me lovely mam and dad,may their souls rest in piece.
The same time period was fleshed out in the comedy department by 'Top Comedian' Ted Chippington,whose main aim in showbiz was to alienate the audience by being 'crap'.Frequently he found himself as the support act for such hip acts as the Fall and The Nightingales,whose Vindaloo label released Ted's records.Ted's thing was not to make audiences laugh but to get up their noses. Or, as he puts it himself: "To make the main band seem better."
With a deadpan drawl and the sort of punchline-less gags that would leave the average punter baffled (it doesn't take much). Invariably starting "I was walking down the road the other day...", Ted's jokes were anti-climatic nuggets of pathos, dressed up as surrealistic nonchalance.The kind of empty chit-chat you hear between persons of a certain age at the fruit and veg stall down the market.
"I was walking down the road the other day, this chap walked up to me and said 'Do you want to buy some grass, mate?' I said 'No thanks, mate, I've got crazy paving. Haven't got a garden, you see.'"
He was a refreshing change from those facking awful shouty shouty left wing "Alternative" comedian bastards of the time(yawn),like cheeky faux cockney jack the lad middle class champagne socialist Ben Elton,and the jokeless drama they called "The Young Ones".....we wanted an alternative to all that shouty Thatcher baiting boredom, and Ted provided it....at least until he went on the Vindaloo tour of America and never came back. I don't know how his routine went down in America....do any video's exist? The man himself explains: "I tried to make a career there," he explains. "The Americans were surprisingly responsive but it never really took off. It's such a big place. I stayed there til I couldn't afford it."
He's back now, and resurrecting his career...what career? Still on tour with The Nightingales....the best gig in any town is that one.
"I look forward to when I've got a car and I can drive down the road, so I won't get all these characters coming up to me."

Tracklist:
A1 Introduction
A2 Rock'n'Roll on 33
A3 Ready Eddie
A4 Life On The Road
A5 Rocking Ribbons
A6 Comedian By Trade
A7 She Loves You
A8 Interview
B1 Feel Like Buddy Holly
B2 True Greatness
B3 Atmosphere
B4 True Stories
B5 Rocking With Rita
B6 Weirdness Oh No
B7 BRMB
B8 Cheers
DOWNLOAD about here...roughly speaking
Posted by Jonny Zchivago at 11:33

Is this the guy that Stewart Lee is such a big fan of?

I'll save the Fuhrer some bother by fielding these questions, Yes he is the Stewart Lee guy. I did enjoy 'Bottom', thanks, and really like Rik Mayall and Eddie Edmundsen comedies as well. Oh, you weren't asking me? P.S. I hear tell that El Benton was, ALONG WITH HIS fOOTLIGHTS PALS, A PARt of a secret MI5/CIA stage schoo, designated to pantomime a phoney protest, hence, his later garlanded at Bush 2's soiree, and honest repudiation of any political intentions in his schtick. There was simply an assumption it was all about 'Fatcher'

PS thanks for the Chippington rip, and everything else - I tell everyone to make a bee line to DIY - Or Die!

thanks for the rip but there are a couple of tracks missing.

The missing tracks have now been found and added and re-upped.

Thanks a bunch for uploading this! never expected to see Ted Chippington on this blog... I don't suppose you also have that 4cd boxset that was released of his stuff ages ago? I think it was just called Walking Down The Road