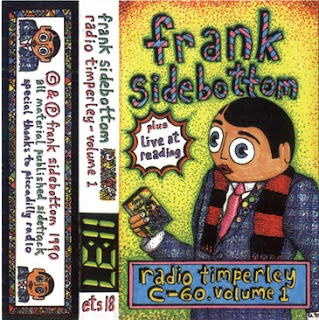 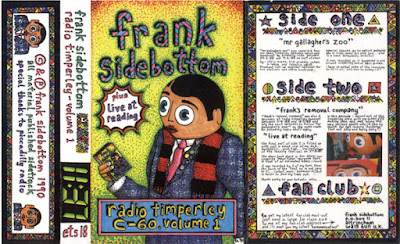 Apart from the obvious delights of two episodes of Frank's Radio Timperley show on radio Piccadilly,the real treat is the short extract from Frank's appearance at the 1989 Reading festival ,in front of a crowd of 4800 drunken revelers squeezed into the 2000 capacity Mean Fiddler tent.
The roar of the crowd for Frank's appearance must have been the loudest of the whole festival,and the call and response crowd participation  version of "Guess Who's Been On Match Of The Day".....to which the crowd replied "Yoooou Have, In Yer Big Shorts".,was beyond impressive....almost as ear-bleedingly loud as the Kop at Altrincham FC in full voice (singular).
The response was such as to suggest that Mrs Sidebottom's only son would have been a far superior headline act than The fucking Mission??...wot??...or the bloody Pogues,and especially New sodding Order!..who were the official top acts at Reading 1989.
Quite refreshing to see a lack of Rap acts in the line up,with a sprinkling of  what I would concede to be half decent acts lower down the pecking order.

And I thought the Reading Festival was something to do with books?
In this particular cul de sac of France, my local festival is a Poetry Festival,where I witnessed,and I kid you not, a French lady interpreting the Poetry via the medium of dance.Almost as bad and pretentious as the Michael Clarke Dancers interpreting the music of The Fall. That was my lowest ebb as a Fall appreciator,especially after there was an American and MES's missus (same person incidentally) in the group;..then MES started wearing trendy suits !?.....on top of that,but worse, becoming part of the South Bank Glitterati.No wonder Smith upped the alcohol intake.
Frank Sidebottom could never be pretentious if he tried......now as for Little Frank, I can't guarantee that he wouldn't be tempted.
Never trust a Short-Arse,even one made out of cardboard.
Tracklist:
A1 Mr Gallagher's Zoo 28:35
B1 Frank's Removal Company 25:42
B2 Live At Reading 2:53
DOWNLOAD direct from planet timperley HERE!
Posted by Jonny Zchivago at 14:24