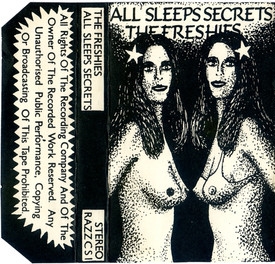 Of course you do know that the singer songwriter lead guitarist and general busy body of this group, Chris Sievey, was also Frank Sidebottom.....or wazzit that Frank Sidebottom was also Chris Sievey? I dunno,i'm confused,mentally bruised, and live the life the way i choose.
Not too great a fan of The Freshies' flimsy new wave cycledelia with unhealthy pretensions towards chart action,one has to say;but it's inoffensive,and has its fair share of G.S.O.H,...gosh. Like fellow Manchester band, 10CC, too clever by half,but largely lacking tunes. Of course, 10CC had a handful of good,maybe,great songs,and so did The Freshies,though i'd be struggling to tell you which ones....."Yellow Spot" was not bad i think, although sadly not on this self-released cassette,that came out as Chris tried to be even more New Wavey later on.
Chris was never shy at self-promotion,being a veteran of a musical sit in at Apple Corps offices in '69.But none of the Beatles were in, and nobody said "Hey that's a great song maan I wanna sign you up".
This didn't discourage the young Sidebottom,and he/they proceeded to release stuff by his group on his own cassette label,in 1974, at the height of 10CC's fame incidentally ,and long before most UK DIYers were doing the same thing. Chris shows his age when the Psych-pop of his formative years becomes mixed with some very fashionable,for 1978, three minute new wave symphonies.
This guy should have been on the Telly.
A1 Slip 3:13
A2 Baiser 2:35
A3 Two Of The Same Girl 1:53
A4 Ballrooms And Moon 2:55
A5 No. 1 Fear 5:03
A6 Bogey man 4:34
B1 Into The Wind 3:31
B2 Over The Sun 5:22
B3 18 Down To 24 fps 1:33
B4 David The Shepherd 2:25
B5 Big Top/I'm Falling 2:38
B6 Lovely Bars 8:27
DOWNLOAD the sleeping secrets of chris sievey HERE!