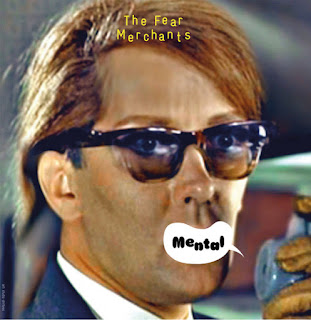 Fear NOT!....I'm not going to mention "The Special Military Operation" that is saving us all from Nuke wielding Neo-Nazi's. The only Fear Merchants I wanna listen to today are the almost God-Like Amos and Sara under another of their many guises.Featuring Jim Welton,late of the almost God-like Homosexuals, and Sara Vaughan of Sara Vaughan fame.
Originally this was a cassette on the almost God-like "It's War Boys" DIY label, or should I say "It's a Special Military Operation Boys" label.....the original cassette rip of which can be found HERE!...if you like that sort of thing...which of course you do?
This rip is from the much awaited vinyl re-releases from 2019,or thereabouts.This also means that we now know what all the tracks are called.If anyone likes a good Larry Olivier Nazi Doctor pastiche then this is the record for you.
If you wanna read my original review splurge blurb write up then click HERE!...'cus i can't be arsed to do it again.
Meanwhile a parting message for any poor lickle Russians (ahhh bless 'em!) that are still able to read this.....I'm just going to MacDonalds for a burger and a coca-cola,but first i'll have to withdraw some cash from my open banks ATM machine,then maybe do a bit of shopping before settling down to watch some of the myriad of TV channels available to me.May even browse Facebook too?......and just think, at least you've got a fine permanent leader like Vladimir Putin and we have to cope with rubbishy old Democracy. I envy you.......altogether now..."WAR!...what is it good for? Absolutely nothing".....whoops you've just been arrested as a precursor to a sound beating!?...."Huh! say it agaaaaain"......not likely Edwin,it's fifteen years banged up in a Russian Prison if certain nationalities say it twice.
Ain't life great?

1. Act One
2. Un Choix Du Mal Song
3.Meanwhile.....back in the Doctors Surgery
4. U - Boat Captain
5.Enter Giant Whales Mouth​.​. Leaving Through Its Anus Back into Surgery of Doc
6. The Uzbeck Connection 9
7. The Irate Psychiatrist is Shaking His Head in Disbelief at the Patient's 'Stories'
8. Industrialist's Dirge
9.Reflections in Psychiatrist's Spectacles Theme
10 Act Two
11. Fiasco
12.Visibly Brighter the Psychiatrist Thinks He's Getting Somewhere at Last
13. Ya Habibi
14.She Runs off Across the Sands and Vanishes in the Ripples of Hot Air Rising Upwards
15. Aristocratic Hunchback Out-cast Song
16. Absolute Misery Theme
17. When She Weighs Eighty-Six Stones
18. Mental Theme

Beats the fuck outta current events anyway. When wasn't that the case?

Thanks for the chuckle. Can't wait for a McD's in my neck of the woods...I feel their pain...