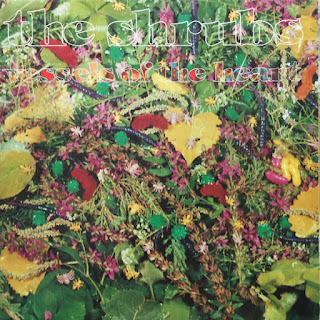 Looking back in Die or DIY? blog history, i was astounded at my omission of quite a few Ron Johnson Records type recordings that I inexplicably left out. Of course everything possible by Bog-shed is there,and they weren't even on Ron Johnson;whereas,The Shrubs, were!? The missing second album,released after Ron Johnson went bankrupt.....it was only a matter of time of course....must now be sent forth into the digital domain.Something that i am not aware has happened to the medium of the Digital Compact Disc concerning The Shrubs.
At the time I was not aware of any second album being released,having assumed that the rest of the 'Shambling' stable had succumbed to the perfect storm of Ron Johnson disintegration and the impending awfulness of Madchester and white boy idiot dancing. Breakbeats and funky wah-wah guitars were not The Shrubs thing. So they disappeared,and I will have to admit through clenched buttocks,that I was shamefully swept along with all that Indie Dance shit.....'twas either that,or be billy no mates on a Friday night.I am,however, particularly proud of the fact that I was ejected forcefully from the Happy Mondays gig at Leicester Polytechnic in 1989 for projectile vomiting over the bar.I remember nothing of the evening in question apart from that.......I blame the music and the worst ever clothing fad since the Bay City Rollers.
Nick Hobbs.....not Mick Hobbs I may add to avoid confusion, did posses an uncanny ability to get on one's proverbial Titz with his wailing vocal style, but that's all part of their endearing charm innit?
Musically,like the rest of the unrelated bands in this 'Shambling' category......us 'Normals' need categories y'know.....has that alluring bouquet of "Trout Mask Replica" style dueling discordant guitars and dueling time signatures;with,of course, that J J Burnel bass sound  as played by that bloke from The Rezillo's.(RIP).Maybe even hinting at some Rockette Morten four string influence,which can't be bad?....The Drums?......the rhetorical answer to which has to be.... "Drumbo"?
This may be their best long playing record methinks.
Tracklist:

man, i love the shrubs! bought all their early gear but had not one clue this existed

Speaking of Ron Johnson, any chance you have & would consider posting the v/a "First After Epiphany" LP? Cheers, M.

Speaking of Die or DIY? history, something drew my attention to a Gil Mellé album posted back in July 2020. I had offered to post another if anyone was interested. Apparently in late November, ‘Aljaž from Slovenia’ under the handle izzy expressed an interest. I don’t know he he’s still around, but I figured he’d never see my reply from a year and a half later, so here it is here if izzy’s still here.

Badgerboy...yeah Shrubs.....i'm getting used to Nick Hobbs voice now.....its mixed further back on this album which helps.

Rev.b....finding a particular commenter in this seething cauldron is like trying to find shackleton's ship under shifting pack ice...it has never happened.....unlike finding Shackelton's ship, so i'm informed.

jonny zchivago, yeah, bottle in the ocean. Should've just posted the link. It's there for for whoever comes along then.