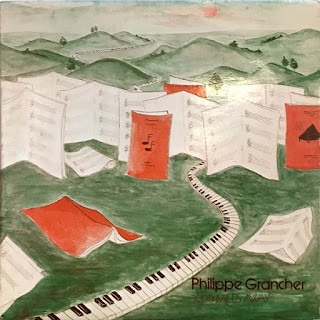 About the same time Throbbing Gristle were glamorizing serial killers and feeling too clever by 'arf, a forward looking French guitarist was predicting future serial killing by assuming the form of Cromwell Street child killer Rose West 20 years before she got her dog collar felt by PC Plod.
Never ones to put style ahead of tucking a sweater into some high waisted slacks, the French guitarist doesn't understand why image should come before musical proficiency;and Philippe certainly seems to have image pretty low on his list of priorities......and why not?

Although Philippe's career path was registered as "Guitarist" (they do this kind of thing in France,even i'm registered there as an 'Artist' ffs!),he seems to have forgone the requirement to flesh that out by actually playing one.He instead has opted for the banks of keyboards and synthesiser option that was so fashionable in 1975.The few guitary parts were actually played by someone else........Noooooo....not Fred West...someone called Arnaud Chevalier. The lead instrument seems to be a Piano,with  bits of Mellotron,and lots of effects.
Despite looking like a serial killer from 20 years into the future,our Phil doesn't let that hinder his creativity,and keeps his pullover firmly tucked into his waistband to make one of thee better French prog Space rock albums of all time. Another Pole Records classic,but I doubt if Phil was kept on as a model for the Porn Mag that the company became after 1977,even though the pervy glasses are a good look for rude magazines in the seventies.If worn by the unfortunate young lady involved,glasses can be a convenient place to deposit the money-shot.
He can still be seen ,however, playing the blues (zer bloose) in French bars for a living....and he still looks like Rose West......poor sod!
So if you can stand sitting in a café full of swarthy Frenchmen with B.O. wildly applauding that Muddy Waters cover at one of his engagements ,shout out for "3000 Miles" as an encore,and see the room empty as they wheel the piano out.
Tracklist:

Thank you: I love this Pôle records stuff. I'm surprised no one has commented about Graham Lambkin's "Amateur Doubles" which was recorded in his car while 3000 Miles Away and Besombes/Rizet's Pôle play on the stereo! Highly recommended.

Cheers pense-BITE..just a little in joke for you frenchies out there.
Yes, got another Pole record to put up by Potempkin....a fine band indeed.
Was not aware of the graham lambkin story...in fact i think i may have a file of that on a hard drive somewhere.