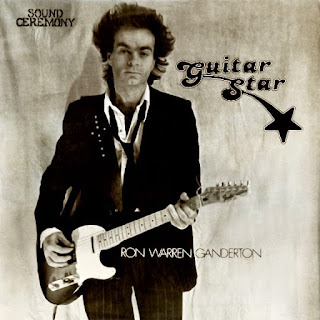 Praised by private-press hunters, esoteric appreciators and “out of time” searchers alike.Canadian and legend in his own extended lunchtime,Ron Ganderton,and his output hold echoes of monotone  proto-punks such as Jonathan Richman and Lou Reed,but without the good looks(*?), or the charisma,...or even the questionable talent of those aforementioned fellow travelers....*check out that boatrace# girls!?
Similarities to outsider cult acts such as the extremely nutty but clued up Armand Schaubroeck and the less nutty but completely clueless Kenneth Higney,are as inescapable as they are wrong.....Ron.
Ron was fortunate enough to have the Subway Sect's drummer Bob Ward, and later, Martin Chambers of the excellent Vacants,and the later,but lesser combo, The Pretenders; to back his Velvets out-take tunes and keep him in roughly four four time.....which is a talent very few outsider Rockers seem to embrace.Ah bless him, he's trying his best,but he's missed the wave again....several times by the look of him.
The usual tactics are involved in the new wave cred myth building stakes,as the punk before punk hands shoot up in the room, claiming that this record was made in 1974,so Ron Warren Ganderton must have invented Punk,right?...along with Death(the group), The Modern Lovers,Stooges, and many other proto-punk pretenders.The "I was a Mod before you was a Mod" syndrome. Ron was never a Mod,and he's obviously tried to jump on any bandwagon that was going before the wheels fall off; but Ron's Wheels fell off long ago by the sound of it,and he also fell off the noo wave bandwagon too.Especially when you hear his second, and truly dysfunctional outsider classic album,simply called, just, "Sound Ceremony".
Maybe Lou reed ripped him off and we've all got it so very wrong.....Ron?.....somehow I doubt it!
NB;
# Boatrace is cockney for Face
&
Get the even nuttier second album HERE!

A1 Guitar Star
A2 Letter To Moma
A3 Concrete Rodeo
A4 Miss Vickey
A5 Come The Change
A6 Feelings
A7 Love
B1 Blues Miss Your Mind
B2 Fool
B3 Lonely Road
B4 Booze, Drugs And Sound
B5 The Lady And Me
B6 The Devil
B7 I'll Go To Hell For Your Love My Lady
DOWNLOAD wrong ron ganderton HERE!
Posted by Jonny Zchivago at 13:25

Hello, when I click the link it redirects me to his other album page

just heard an interview with Vic Godard where he mentioned meeting this guy back in the day - apparently they were both recording at the same studio at one point.