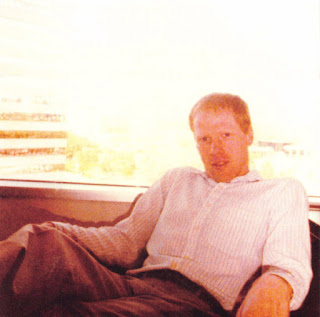 It's common knowledge that anyone with any brains dislikes Country and Western music,and the god-fearing morons who listen to it. So to hear Jandek having a go at making his own Country (or shit..) stained improvisations in Texas , in a Presbyterian church no-less,likely in front of  a church full of liberal arty-farty-artphags instead of fully armed redneck homophobic racist misogynist anti-semites; does indeed entice one's reluctant toe-tappin'feet to move in that once taboo direction.
The only instrument I can think of worse than a fretless bass has to be the pedal steel guitar,which makes the sound that Tom's whiskers make when they are stretched to the limit in a Tom and Jerry cartoon.Good for sound effects, shit for music is what i'm a gettin' at boy. In this instance played by top Pedal Steel guitar improviser Susan Alcorn, who seemed to have a one woman goal to make this instrument sound less shit. The Female Mick Karn?.....oh come on Dali's Car made a great album,and there's Tin Drum too!!!?
If Country and Western sounded like the abstract version that Sterling and college trained bluegrass buddies put forward on the Rep's fourth appearance in Austin, then all would be different. The cowboys will have killed themselves,we'd all be naturally cleverer as a consequence,also know as herd intelligence,as opposed to the herd stupidity we have today.There would be no republicans in the Whitehouse,including the new Democrat Republicans like Biden, and we'd all like the sound of the Pedal Steel Guitar.
What's not to like?
A word of caution, if you are one of those types who give truly terrible abominations in music a chance,and i'm complimenting them by considering these things as music;like musical evils, such as all Hip Hop,Lovers Rock,K-Pop,and country;then I warn you country apologists to approach with extreme caution this cockamamie Jandek and Western alloy,for it be not as palatable for yee as a bowl of Grits sautéd  in last christmas's Deep Fried Turkey entrails' ultra saturated fat......and two hard boiled eggs.....make that three hard boiled eggs.
Tracklist:

A return to form cover wise. Always appreciated a wordless cover, a picture being worth a thousand after all.

indeed rev....covers with no words and no band pictures are an essential in my aesthetic bible..therfore i'm a big fan of Jandek covers featuring parts of rooms, or houses and no jandek...unless he's a shadow or silhouetted.
There were of course albums that didn't even have song titles,or even worse symbols.
My personal hate in album cover art is band members lists and what instruments they played....especially if its guitar plus oboe,theremin, tubular bells etc....you get what i mean? Mike Oldfield was the biggest bastard for that....really all he played was the guitar,but he listed every different type of guitar he could think of just to show off.....i was impressed as a child,especially at the recording tech, i even bought Tubular bells...maybe my fourth album ever....ok heres the first three....Slade - Slayed; Bay City Rollers "Shang-a-lang" i think, Queen "Night at the Opera", then tubular fucking bells, which i can play note for note in my head.......but fucking "double speed guitar"...com'on!

That's a hellava child's music collection. I can still deal with Tubucular Balls as long as I'm not forced to dwell an crappy hollywood movies about excorsists, big dick branson and the like. One wiff of 'marvel in the miracle of me' and I'm off, unless it's a chair or the side of some annonymus house. Double speed guitar? sheesh.