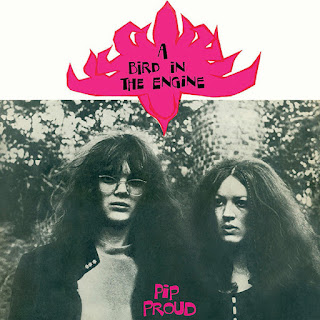 When the land mass of Australia broke away from Pangaea a billion years ago, the isolation led directly to the evolution of the marsupial . Then in the sixties,the cultural isolation directly led to the evolution of Pip Proud. A self-described singer-songwriter, poet, novelist and dramatist....when in fact he was shite at all of these vocations.....it's another way of saying I'm a lazy fucker and I ain't gonna work.No one can prove that a poet isn't working on his next 'poem',even when it looks like lying down. Not that this lisping tone deaf myopic missing Shaggs member was employable in any way.The fool who signed him to Polydor could not have even met Pip,or heard him in action until it was too late. To think that he could have been Australia's answer to Donovan,was a miscalculation of decca-esque proportions!? Whoever it was must have been sacked.Its the opposite to the prat who rejected the Beatles for Decca......having said that I would have done the same if i'd heard Love Me Do....but certainly signed Pip Proud,looking from a twenty first century perspective therein.
Pip's output, is often compared with Syd Barratt's solo work,of which Philip denied all knowledge;but this stuff makes Syd sound like more like Wagner rather than the acid casualty we know he was.Worse news for Pip is that Syd Obviously had a talent for songwriting,something no-one could say about Pip.
Pip's song's are constructed along the same lines as The Shaggs first album,as if he had been locked away from any music in a cupboard for 18 years,then let out to make his impression of what music should like to someone who has never heard any.It's no coincidence that he even looks like the mythical fourth Shagg.There are no verses or chorus's as such,with the droning guitar chord sequences strummed in a barely conscious stream of hazy unconsciousness kind of way. His pronounced lisp is not only charming,but adds that seed of a doubt whether this is all just another of those 21st century fake band Jokes,recorded by a comedian taking the piss out of Sixties Folkies, and record collecting saddo's.....it's hilarious either way....especially if it turns out that pip Proud was actually Real!?
Something he does actually share with Syd Barratt, is his wavering time keeping,exacerbated by his glaring tone deafness.
Of course there are those who hail this work as the product of undiscovered genius,and take it deadly seriously.....Maybe I'm the idiot who got it wrong? I sincerely doubt it, but whatever is the truth of the matter, this record is fucking hilarious.
Pip does actually sound uncannily like Candice-Marie from BBC drama classic "Nuts In May" by Mike Leigh (1976)
Check out Candice's protest song(click the embedded video) that plays over the end credits. If you haven't seen it,you have never lived...you can right this dreadful wrong by watching the whole thing by clicking HERE!
Tracklist:

A1 Marie
A2 Hey Sue
A3 A Fraying Space
A4 She Says To Me
A5 She Dwindles Her Fingers
A6 A Bird In The Engine
B1 Eagle-Wise
B2 French Girls
B3 Vida
B4 There Is No Rest
B5 Nancy
B6 Lover, Lover
DOWNLOAD a cuckoo flying over the engine HERE!
Posted by Jonny Zchivago at 08:55

Australian land mass did NOT break away. The seas rose that's all. Theories are NOT fact. just like virii do not cause disease nor replicate, just like asymptomatic is scientific bullshit, just like politician's promises, just lies, half-truths and absolute shite.

Dr Sandi Hook,proffessor of absolutely everything has put a thousand years of science in it's place yet again. Theories are not fact but Prof Hook's baseless nonsense ARE! Even though he has a fake PhD in regurgatated facebook lies, half truthes and total absolute shite.
I struggling to work out where this massive amount of biblical water came from to fill the indian ocean when there is no evidence that the ice caps melted to that extent even at the end of the ice age.Just enough to fill the very shallow north sea where there are submerged human settlements....no such thing has been found in the Indian,pacific, and antartic oceans. But i know this is bullshit because you say its all lies.....the motive for which is pretty obscure,and for the first time in human history no-one has spilt the beans with their notoriously loose jaws. Keep on enlightening us Prof Sandi,your logic makes me feel like a Dick.

@ Sandi Hook -- a _scientific_ theory is pretty much FACT, the word "theory" there is used in a very different sense from common usage. Jeezus Christ! Get an edumucation.

Also, Pip Proud. Damn, I almost totally forgot about that guy. Wonder if he was ever employed as a body double for Robert Jan Stips?

Fanny I don't wanna be a Candice Marie purist,but in this week of the climate-change conference COP-OUT 20 something, her pioneering lyrics will not be allowed to be misquoted...Liver does indeed make me shiver, but for the uninitiated "Litter" made her shiver. and quite rightly too.

Not Aware of any MES involvment in anything Pip related, that doesn't mean it didn't happen however.

Indeed, but does Science understand Sandi?...the science of Psychology certainly does.

Been looking for this. Thanks so much!

Great stuff, track 5 seems to be missing in zip,thanks for the great tunes, I'll redownload

Thank you, last track on Adreneline And Richard was not in my file either, sorry, loving this latest round of outsider, great back story on Armand!!

Just updated the file..."laughter laughter" should be there now.
More outsiders to come after my Climate change Rant.
Yeah, Armand, he was a one wasn't he....there is more armand comin up too.