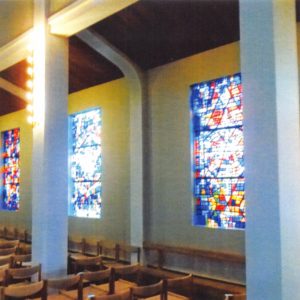 At the risk of being murdered by psychotic Jandek worshiping nutjobs for stealing their god's music without recompense to the 'Artist',or even his Representative therein, it's time for our much anticipated regular annual 'Catch-up with Jandek' feature.Starting with yet another London appearance,this time on Monday,June 16th, 2008, at Café Oto again,and NOT in the generic modern Church pictured on the cover.
Although,Churches,specifically Christian churches, could do with Jandek's help in getting some bodies,preferably living ones, through their doors?
It's a sad indictment on the state of the Christian religion in the more secular areas of the planet...ie the intelligent bits....when Jandek can get a far more numerous congregation than God can.However, it seems that Jandek is indeed a God to a small selection of mental cases throughout modern secular society.
As some smart-arsed wag once said, 'if there wasn't a God there would exist a need to create one' and in Jandek's Case ,through focused, dogged, perseverance, Sterling Richard Smith, aka The Corwood Representative, has created a persona, or rather,lack of persona, crazy enough to have filled that God shaped hole in their misfiring brains.And why not? The jumbled mess that is his recording career, makes by far more sense than any of the chief monotheistic holy books. It's a one size fits all religion that can fit on one side of blank A5 printing paper,consisting of just a pair of brackets encapsulating a short amount of underlined nothing for you to fill in the big blank yourself.(_________),This is Jandekism in action.
Jandek, or God's representative on Earth,or even just God, does exactly the same with his music,or rather the music of whoever he's 'collaborating' with,which in this case consisted of a couple of London dwelling improvising trendies,over which The Representative does his 'stuff'.Seemingly channeled from some nebulous musical dustbin floating around the Aether,within which Jandek is probably thee cosmological constant that Einstein was mistakenly looking for during his entire career.
Another method of getting more of god's likenesses in a church,other than getting Jandek to do a gig there, is the latest camping craze in the Uk called 'Champing',which consists of holiday makers paying the holy man to stay for a number of nights camping inside his church.
What their deity has to say about this one could only imagine.Moses would have both the Vicar and the family of Holidaymakers stoned to death, and probably most of the local population of adulterers,graven image makers and Canaanites to boot.The oldest excuse for genocide..."Kill them all. The Lord knows those that are his own",or in Latin,"Novit enim Dominus qui sunt eius." (accredited to some bloke/murderer at the siege of Beziers ,1209, during the Cathar revolt)....what that has to do with Jandek I dunno,but the degree of separation in the modern world and throughout time has now shrunk infinitesimally enough for a crazed Jandek fan to actually kill a stranger for sins against his God.....so watch yer backs.
Tracklist:

I'll watch my back for them Janons

Still good to see you back in action. And even better to have new Jandek posts. Many thanks!

Finally, a reason to attend a church service. But, em, no, I'm not going to be genuflecting for the deity any time soon. Nice to hear a new Jandek in any case. I’m scheduled to go and hear freeish jazzer Matthew Shipp play piano in a church this weekend. Last night I was falling asleep to a bootleg of John Fahey playing his latter day slow sludgy fuck you electric guitar in a church. If I see a light, experience a revelation or find myself ‘saved’ I’ll letcha know. Probably just a bad case of gas tho’.

"Kill them all; let god sort them out." You'd think some sort of metal band would have nabbed that for an album title by now, but it seems not. And so I think I shall use it for some future release--my latest project/band-in-spirit-only has one pf those names wherein you take a "god" expression and replace "god" with "dog," so it oughta work out just perfect. Thanks for the suggestion! Also the Jandek.

I always liked the name Steriliser (Sterilizer in american) for a twisted christian metal band...."kill 'em all! God will know his own" would be their first album.
By all means if you wanna make this a reality, i'm a natural born metal musician.I think i may have a couple of demo's somewhere also.

the gig the night befoe was ina church.was heavy as fuck