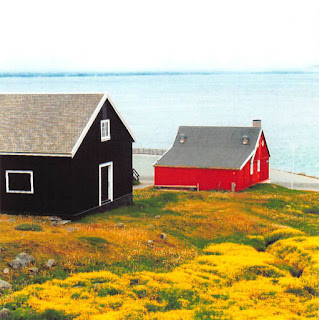 I've mentioned a much shared disapproval of the Fretless Bass as used and abused in the popular medium of music before. Even excluding Mick Karn's work with Japan and Dali's Car from the bracket of disapproval. Well, Mick, may their God rest his soul,is no longer alone in fretless bass limbo.For he is to be joined by none other than Sterling "Jandek" Smith,who wields said instrument like a harbinger of impending doom.Like the approaching helicopter blades as replaced by huge rotating crusaders broadsword's, slicing through the trees below radar in a densely foggy Vietnam,as if beheading Saracens.Piloted by drugged up Scientologists eager to deliver their cargo of Napalm on a school full of children whose parents didn't pass the eugenics test.This time they ain't playing 'March of the Valkyries:It's "Ready For the House" at full volume...which if used as a real weapon in the real Vietnam war, could have caused Ho-Chi Minh to throw himself out of the nearest window.Ushering in a much less pointless period of peace and love.Where Communism worked out just fine, and the Americans kept their fucking noses out of everyone's right to self-determination.
As the choppers,hip slang for not only Helicopters but also for the male member where I come from, slice their way through the solid air of this gloomy Jandekian rumble,we start hearing such complimentary incisions as an outsider Mile Davis,blowing his horn as if warning passing vessels of the rocky outcrops hiding beneath the black waters of these compact discs.What's more we are treated to a rare appearance of the Electric Harpsichord outside of the 1960's British television soundtrack.
Fear not, we do get the standard Jandek howl and moan, backed up quite ably by a young lady victim on back-up moaning.
Heavy stuff,thankfully lacking any pretentious aspirations towards the outsider classical chamber music that The Representative is often enamored with.
One things for sure, don't play this when you're feeling suicidal.You may use an ill advised method to stop that noise in your head.
This was recorded somewhere in Ann Arbor May 17th 2008...isn't that where that Who copyist Glam band The Stooges came from? I think they reformed round about the time of this Jandek gig to make that awful 'come-back' album.....not a popular point of view,but, I do wish Iggy Pop would just kindly go-away....or at least get his male menopause hair cut off.
Tracklist:

I SO agree about fretless bass. I used to love it, and then i wised up.
I really liked fernando saunders with lou reed. Everyone else was playing just straight, so saunders and the wonderful robert quine provided stray valence electrons to spice it up. I can still listen to that stuff from that time, but wouldn't want them to do it again.
I still love japan's tin drum, the fretless belongs there. And I like Eberhard Weber a lot. BUT THAT'S IT! It should be kept out of the hands of most everyone else.
Like machine guns.

It would have been awesome though if he'd recorded this with the Ashetons though, you've got to admit it.

Sterling and the Stooges......sounds promising. As long as Iggy Poop isn't there it should/would be out there.

He should also have been backed by the Love Unlimited Orchestra for the Philadelphia show. He really missed a trick there.

I'm the guy who bothered you recently about an old G-drive link apparently still being active, but now requiring you to sign in. Well, I'm gonna do it again, as when I was going back and picking up some titles by the J-Man I had missed, I encountered it again.

So, if you can't be arsed, I get it, but something tells me that if you made some change to your G-drive account at some point, anything behind that date seems to now want the sign in. If you could do some blanket fix of that, that would be jolly and swell. And if you can't, you're still jolly and swell. Sometimes my OCD just has to deal.

I've tried looking for the blanket solution,but no joy. BUT..i can once you have used the ask to share option remove the update.So just click the share request button and i'll shortly get round to you.....huh! kids today, they want everything NOW!....in fact do me a favor and request ALL of the old Jandeks.....in fact i wanna get round to upgrading them,as they all 128k,which used to be the iTunes standard...what a rip off!?

Well, in theory that sounds good, but I don't know what this share thing you speak of is. Unless you mean something to do with all those little boxes of apps/sites under the DL link, but I don't deal with any of those either.

Anyway - the two I was most wanting were Worthless Recluse and Put My Dream On This Planet. (Which also ought to tell you I have problems way beyond this trifling internet stuff anyway...)

Well, i dunno what it looks like either,but lots of persons unknown seem to be able to do it....but not you?.....i think i can invite you by e-mail address, but that would entail you giving me your e-mail address....?Dunno if you're up for that eventuality or not?

Not that big a deal really, though I appreciate it. But the odd thing is, there are other (older) G-Drive entries that don't do it, but others that do. That's why I wondered if there was some sort of account change or whatever along the way that would have flipped the older ones to wanting a sign-in.

Hi, not a hidden track, but a fuck up by me. I thought I'd removed it....I'll get it identified for you.

Hi again, 'hidden Track' identified....It's one of mine by my drum'n'Bass alter-ego from the mid-nineties....Thee Outside "Instructions from God"...you can get the rest of the album here:

Very nice too ... i think was jandek after a long meditation trip over PIL Second Edition / Metal Box ... i think maybe i can use "Instructions from God" when i play my new cheap-Gear4Music acoustic freetless bass ... i am not Anonymous anymore but i have too much names ahahaha (mainly Noisy Factory bat also Dorian Gray, Mosaico etc.) ... i'm 55 and in my past life i had tape-label called "Croda on Tape" and just yesterday i see one of the tapes on .... thanks a lot for this time DVAtion ... feel free to repost or not ... https://nostalgie-de-la-boue.blogspot.com/2012/11/various-artists-all-you-look-for-isnt.html