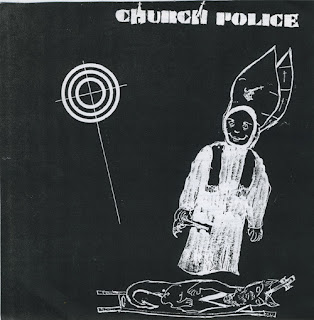 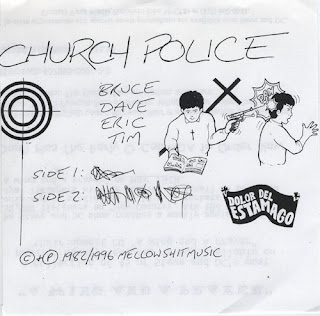 This outstandingly awful disintegration of the Rock'n'Roll idiom scores highly on the shit-fi scale.Even the remastering and pressing are abysmal insults to the art of melody. This could clear a toilet of Kasabian fans faster that a North Korean supermarket loses it's stock of beef on its annual delivery day.
Yeah its like a better,less rock,version of Flipper,but there ain't enough bands like this. Slogans such as "No records released in their lifetime", is as good a sonic aphrodisiac as "File under Easy Listening" or "Not Available In Shops"......well maybe not, but its always a go to statement for most things on the outskirts of the noisy venn diagram of  Rock'n'Pop .This seven incher, does indeed boast one of the best disrespectful-respectful Black Sabbath covers this side of The Prostate Gland Massagers version of Paranoid,which is high recommendation in itself.
Only in the future can some musics be fully understood; but if you understand this I recommend you turn yourself in to the nearest loony toon room on the moon as soon as is acceptably possible. See you there.
Tracklist:

1 Jarhead
2 Bag Of Lumps
3 Robots
4 The Red Glow
5 Killing Myself To Live
DOWNLOAD the church police in this age of the brain police HERE!
Posted by Jonny Zchivago at 12:22

They say the loony toon room on the moon is a lonely place with no atmosphere. I was hoping that Branson, Bezos and the Muskrat would take off in that direction and run out of fuel.

We're all heading for the loony toon room soon....the bastards you mentioned will hopefully be vaporized in their own rockets in flight toilet facilities...either that or get litigated into oblivion when their silly rockets kill some innocent billionaires who paid a king's ransom, larger than Africa's GDP, to skim the earth's atmosphere,only to explode upon re-entry to loud cheers from the watching public.

Disgusting noise disguised as music from a pack of drugged up fuckheads, love it!

Church Police, the very proposition causes the sphincters to tighten, as it has for thousands of years, freshly resurrected in Afghanistan. On Stomach Ache Records no less. They defiantly had their collective finger on the pulse of something. I like these guys.