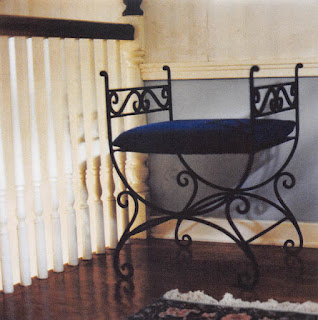 Whip out a clarinet, harp, bassoon, and Grand Piano, and you get automatically branded Classical,or,even better, Neo-Classical.But Jandek's chamber-pot Quartet does stuff most classically trained musicians cannot do,ever; which is improvise. Bassoon solo anyone?
As for the Classics,the moment the needle,lazer,or tape heads hits your pre-recorded media of preference there's a feeling in ones' brain which says, loudly and clearly, "I'm Bored".....yeah, like the Iggy Pop song, but even Iggy Pop bangs on about how he listens to Classical music a lot. There's something of the Nigel Tufnel's "Lick My Love Pump" about any pop star boasting of their higher intellect by proxy,due to the fact that they allegedly listen to, or, are influenced by Classical composition. Like Nigel says in Spinal Tap, "Like, I'm really influenced by Mozart and Bach right?" ; as James Osterberg says, and many other more pompous pop Twats have ventured both before The Pop,and after The Pop.
The equally pretentious, and ultimately meaningless soundbite that gets bandied about the Rock'n'Pop world a lot also, is "Classically Trained".Which usually means they've had a few piano lesson when they were a kid, or scraped a violin at school for a couple of years before they grew some pubes and learned that a G major get girls,...or....boys....or....well, you know what I'm getting at...whatever you self-identify as!.....to notice them.Guitars get you laid, is what they say I'm told; however they usually get me laid out,or kicked out.
The "Classically Trained" Mick Ronson wanted to play the cello,but he opted for Electric guitar instead.I would have paid to see Mick gurning his cello parts during Vivaldi's Four Seasons;and no-one gurned better than Mick Ronson during a guitar solo....no-one!
I can safely say,without reservations, that Sterling, "The Corwood  Representative",Smith, is NOT Classically Trained. In fact, I have doubts he's ever had even a guitar lesson,despite the fact that he does manage to play a few chords,albeit accidentally, from time to time.
Without Sterling's dulcet tones,one would be confident in the assumption that this two-hour long spectacular was an Arts Council sponsored self-indulgent sub-classical composition especially arranged for the world's worst poet to moan and whine over.
Sitting watching and listening to this for two hours,trapped in the middle of a row of pretentious trendies sounds is not really my idea of a fun night out.However I do love the long silences between the end of the piece and the audience applauding, after first looking to see if anyone else is clapping.
However,I am pretentious,or Portentous enough to enjoy this while I'm washing the dishes......and i'm gonna tell you about it too!
Did I ever tell you I'm greatly influenced by Beethoven?....that's right, I'm Deaf...but Deaf-initely (ha ha) not German! I wouldn't wish that burden upon anyone,except maybe, The German's?
Tracklist:

If it isn't what you learned at university, it's probably worth pursuing. The players high brow ivy league music schools typically churn out plan to spend their careers sawing their way through 'the classics.' Apparently they can got all obstinate and bitchy about new pieces by living composers that contain 'problems', i.e shit they didn't tell them about in school that they’ve now got to figure out how to play to satisfy the composer. Frank Zappa used to moan about that sort of thing. I’m not trying to suggest Jandek is some sort of, ahem, ‘composer’, just the opposite. I imagine the only directions he gave these people were probably pretty sketchy and undefined. Looking forward to hearing the results.

I enjoy Jandek's numerous recordings a lot, but this one is pretty boring, indeed. But please do continue posting Jandek concerts! Otherwise we would have no chance to keep up with all his new albums (must be about one per day). Best wishes and many thanks from a German