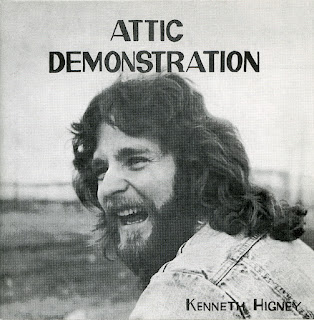 In these mixed up muddled up ol'days, every fucker thinks they are undiscovered genius's just waiting for that chance to unleash their greatness upon an unsuspecting public. The trouble with that assumption is that the public all think they are undiscovered genius's as well. Its like that Monty Python sketch where everyone is Superman,except for one special superman who,when needed, becomes  Bicycle Repair man,racing to the assistance of any unfortunate super hero with a flat tyre.
In Kenneth Higney's day,the world was full of Bicycle Repair Men when it came to music. It was impossible to be Emerson,Lake and Palmer,unless you had a million quid to splash on walls of modular moog's,stainless steel drum kits,and three articulated lorries to spoil the public with your undeniable skills.
Nowadays every fucker has a home studio,and has an album out,or is in a fucking band all playing shiny new instruments.
Then,oh shit!, "the Great British Mistake", Punk Rock, broke and the DIY dream started. Great! We can all be pop stars now.What a fucking well-intentioned fuck up that turned out to be?
If I hear another harsh fucking noise project by wee willy and his hip granny i'm gonna burn my Beatles records...again! What's the point in making music at all if everyone's doing it.....(h)'elp!Come Back ELP, all is forgiven....the problem with that damn fine Idea is that only 'P' is still with us,having lost 'E' and 'L' to suicide and cancer some years hence.
In 1976 Ken,a true Rock Star's name if ever there wasn't one(?), self-released this LP in the hopes of garnering attention for his tenuous songwriting skills.Slightly Ironic because he obviously didn’t have any.He,and group, did,however, have the envious ability of naturally owning a very wobbly understanding of syncopation,harmony,and/or melody.Rhythm appears to be a foreign country for Ken and his chums it seems.
Yes,by accepted standards,old and new, this album is total crap,but, healthy crap floats to the surface of a cesspit that is the charmless modern machine played poop which trains the brains of our charmless children.Give us something less desperate, honest, with imperfect perfection like a diamond on a turd,or a sapphire strewn necklace around Adele's newly slim neck.
In short,Stop fucking singing,put your ramones T-shirt in the trash, and go get an office job,or an HGV licence. That's the new Punk Rock, telling your hip black leather wearing tattooed Mom and Pop that you're gonna get a Job. That should fuck 'em up,the lazy climate destroying cunts that they are.
I discovered this short,stupid, but succinct review on Discogs:
"This is probably the shittiest record I have ever listened to, singing and songwriting are absolutely rubbish."

I'm sorry, but this is a truly great record, you just have to give it a real chance. Listen to that unbelievable groove (and the lyrics) of 'Let Us Pray' and you'll know what I mean.

No, you misunderstand me, I love this record,especially the parts that are clearly falling to pieces(i'm envious of this as stated in the post).....but you have to admit it's firmly in the 'so Bad it's Good' category.That's the only reason it has achieved cult status...like the Shaggs etc.
Lyrics wise...Bob Dylan he ain't

You're 100% right again! Naivete. Sincerity. He doesn't need to be Bob Dylan. We've already got one.

I just had this odd vision that alec baldwin's bullet was meant for dylan but a time-space hiccup foiled it. Pat Garret and Billy the Kid was shot in Durango, New Mexico 49 years ago. Baldwin's movie was shot in Santa Fe. Right as Alec fires- Glitch!-And here he is an old man in a different NM desert. That explains the confused look on his face.

Eric Hoffer said "Naivete in grownups is often charming; but when coupled with vanity it is indistinguishable from stupidity".

I usually hate quotes, most are just inversions of word placement-Failure to prepare is preparing to fail - It's not how much food you eat, but how much food eats you! - And the quotes don't mean something just because some famous git said it.

Like a story I heard about Tolstoy and his brother - wait! The error has already occurred. Tolstoy is the last name of Leo Tolstoy. Isn't it also his brother's last name?! But Leo is famous, so HE'S Tolstoy!

As Winston Churchill once opined, "Flake off, touch-hole!"

MAN, THIS IS FAILURE, BUT WITH SO MANY CONVICTION THAT IT TURNS IN STYLE.
TOTAL FUN.