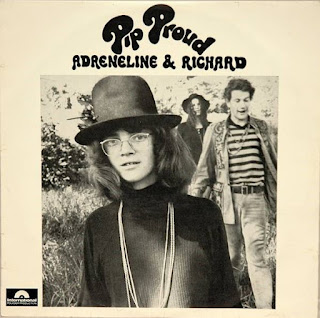 Resembling,as well as sounding like the mythical fourth Shagg. Proud Australian Philip Proud's debut album from the hippie era has very little to do with Adrenaline,even though it appears in the title; but has more in common with an anesthetic. Yeah, he can't sing,has a speech impediment,wears glasses like the bottom of a couple of beer glasses,can't play a guitar or write songs!?...not a good start for a wannabe hippie troubadour who seems to walk around in a bin-bag?.....but gimmie that anyday rather than the bore fest forced on us by any of those trendy 'singer-songwriters' from Laurel Canyon back in '68 (Judee Sill excepted by the way)......excuse me ,a bit of sick just came up into my mouth.
Whereas, Pip could have come from Stan Laurel Canyon, if it ever existed? For the hundreds, if not thousands of acoustic waving folk singer wannabees from the sixties and seventies who were just plain Awful!....not all of them were funny though,so this is why Pip stands out from the crowd of long-hair earnest strummers so much...he's fucking hilarious.Unintentionally so,but funny enough for us to still listen to this terrible dross to this day. His name will be name-dropped at hipster coffee shop get togethers,where they will stroke their beards in appreciation,....and that's just the women.He's played at Outsider Art appreciation evenings alongside the mighty Shaggs,Wesley Willis,The legendary Stardust Cowboy,and the other outsider legends that make our failed lives seem like a raging sucess. Yeah, we need these losers to make ourselves feel good, but it isn't your lost album we're playing is it? Your poetry doesn't get read out at Hipster beat soirée's does it? Oh No!...So who's the loser now eh?
Philip may no longer exist upon this mortal coil (RIP) to unveil his latest work,and he did continue making his idea of what music is well into the new millenium;but he lives on in the form of black plastic disc's,binary codes,and magnetic waves,which is a remarkable turn around for something that we all should acknowledge is patently complete rubbish as modern standards dictate......but, Fuck that shit and Fuck their modern standards.
It's funny too.
But not as funny as Mike Leigh's "Nuts In May",which includes Pip's female equivalent, Candice-Marie,who has an uncannily similar voice.
Tracklist:

"where they will stroke their beards in appreciation,....and that's just the women"

Thanks for alerting us to Play for Today. I have found other eps, from other series. I love things like this. The equivalent in a way to lo fi musc, or at least music that doesn't jump up and try to pop you in the face!

also "Stan Laurel Canyon". A good Stan quote: "You can lead a horse to water, but a pencil must be lead."
Haven't heard this yet, but my first reaction to the syd barrett stuff was laughter, and I played it over and over again for friends and then it started to seep in. I even started to notice the backup on a couple of tracks has that soft machine sound - and it was. Who else could have tracked his meanderings? Like the first Alice Cooper album (also laughed at by me), it's not funny now.

Ahhh Play for Today, shakespeare would have worked for the BBC if he was around in the 70's/80's......highly recommended is 'Blue Remembered Hills' by Dennis Potter.....disturbing or what?.....As was the banned TV version of "Brimstone and Treacle"....i do remember laughing, mostly in shock when the Devil character rapes Denholm Elliot's disabled daughter,which cures her!!!....they don't make 'em like that anymore!

Syd Barratt and Play For Today...the stuff desert islands are there for.Well at least before they are all submerged with meltwater,like culture will be before doomsday.