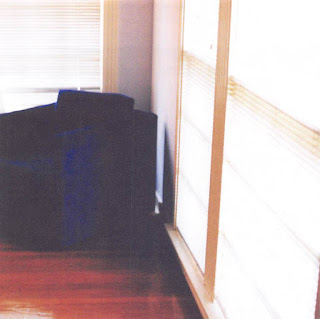 As we rapidly approach Jandek's 76th birthday, his release schedule seems to be increasing;and somehow, they all sound very different;although there are those who would say that they all sound the same. Basically, Jandek sounds like whoever he's playing with these days,unlike 20th century Jandek,which sounded like Jandek,only Jandek and absolutely no-one else.
This one, has some experienced Jazzers, and experimental composers in tow to back up the Corwood rep's doomy synth drones and moaning poetry, for another 90 minutes of living purgatory spread over two CD's.
This is he in a Jandek does an american Throbbing Gristle tribute mode; he even gets a bit saucy at one point in 'Any man';which seems to describe the kind of stuff Sterling allegedly gets up to in his spare time when out of character....so I've heard on the outsider music grapevine,which admittedly produces very withered fruit.
If by some inexplicable oversight, you don't know what Jandek sounds like,I would recommend delving into his vast back-catalogue at random,by choosing one album from 1978-2000,and another from his vast 21st century array of live recordings.....That's what he sounds like, and it should empty a room or upset someone within 30 seconds of the first track,or you've picked the wrong one.
I Played Columbus Friday in its entirety whilst i worked at my calling to make silly mice out of junk for the world to be amused by.The result of this exposure to Jandek,was a complaint from a customer whom could one day come to define the neo-word 'Snowflake';upon opening the package she burst into to tears allegedly, and said that she has never felt more insulted!It looked ok to me when i made it,so maybe it was the malevolent influence of the Jandek wot dunnit? The misery that swirled around my workshop like a malignant fog evading the fume extractor and danced a waltz with my depression.This somehow impregnated the form of the metal mouse and created a grim vision of the futility of existence that only severe religious brainwashing can camouflage. It was either the black magic of Sterling Smith's gloomy meanderings or the fact that the mouse was flipping the bird in the world's general direction that was to blame?......I thought it was very mildly amusing anyway?.....as is, I have to say,a Jandek record. Some people should just lighten up a bit and embrace the awful truth with a jaunty laugh.....except The Corwood Representative of course.I wouldn't know how to cope with a Jandek comedy record,but I'm sure he's thinking of doing one soon,or saving it for one of the early flood of posthumous releases he almost certainly has planned.
Tracklist:

Many thanks and good luck with the Jandekian mice! This is more to my liking than Philadelphia Saturday, which reminds me of an old Disney soundtrack (I'm still recovering from that harp, which I did not find amusing at all, but rather embarrassing). In fact, this album makes me think that I've always wanted Jandek's music to sound like this (even though his singing/reciting/preaching is far too high in the mix and therefore quite annoying, which makes me wish for another proper Jandek studio album). More than ever, I'm looking forward to the next Jandek posts!