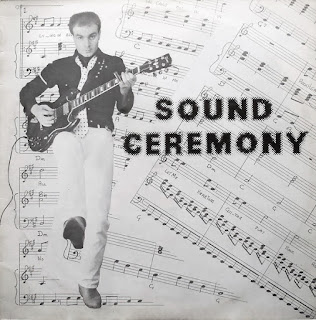 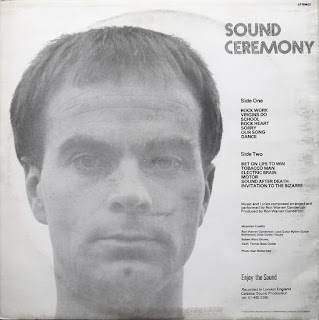 Like 100% of this end of the century post millennium madness crop of 'Outsider' musicians,also known as,rather less pretentiously, as Crap musicians;but also Increasingly, as Crap Musicians who now think they are newly discovered genius's.They mistakenly,as do a lot of Outsider fans also,think that this upsurge in interest means there is some artistic content within this wildly amusing rubbish. Those types who don't know the difference between Laughing WITH you,and Laughing AT you!
I mean just look at this guy! As it's his own self-release,probably on a self-release from the Funny Farm too,as in...He escaped;but he must have chosen these cover shots himself, thinking that he looks good? It's that fashionable 'I'm On Heavy Medication chic' again.The front cover shot is more in the realm of a lost, undiscovered third world psych album from the Muslim half of Kashmir in 1992 rather than a UK post-punk classic.
This, his second record (1st one here!) is that truly brain-damaged winner that we've all trawled through unsorted vinyl dumps to find.The record surely fits somewhere into the 'right place wrong time' category in the UK punk explosion of the day, but it also looks back to the mid-sixties rock that Ron cut his rotting teeth on and ahead to some sort of maniac future form of entertainment that perhaps had not been invented yet.....now it has,namely Outsider Rock/Punk. Ganderton's mildly "out of it" stream of consciousness lyrics show a clear lack of self-censorship or political correctness, but that's really one of the albums strongest assets. He has created this character for himself as a huge rock star and sex symbol, and who are we to deny his claims,apart from the fact that he is clearly neither? The band chugs along amiably as Ganderton covers such terrain as his beating heart (it's made of rock), his distaste for education (he'd prefer to teach a lesson in bed,he obviously wasn't getting any) and his electric brain (which happens to be insane). If you've never heard a singer do a count-off all the way up to seventeen, then now is your big chance! Features what is perhaps the greatest anti-cigarette song of all time,or wot?
He comes across as a bit of a dysfunctional,but charming arsehole,if that's possible?.....on meds....Who says there's no place for drugs in music?
When you have people like Wrong Ron and his unsound ceremony to do it for you,there certainly is.Learning from others mistakes is certainly safer than making them yourself.....unless you're really stupid,like most Pop car crashes are and were.
Ron is now the celebrity that he craved to be,and can be seen hanging around record shops in Vancouver waiting to be recognized, marker pen at the ready and a armful of his re-released work from 1978-81. He deserves to make a living,unlike most other Rock Stars.Hell! I even bought one!
Tracklist:

1 Rock Work
2 Virgins Do
3 School
4 Rock Heart
5 Sorry
6 Our Song
7 Dance
8 Bet On Life To Win
9 Tobacco Man
10 Electric Brain
11 Motor
12 Sound After Death
13 Invitation To The Bizarre
DOWNLOAD and get a lesson,hopefully not in bed,from Ron HERE!

For the record, Charles Hayward sings up to 70-something on "New world order, who decides?", cuz, of course, he's a total badass. (It's on ones of dem Deleuze Unit comps on Sub Rosa. How did Gilles Deleuze make the Sub Rosa label "possible" anyways? Anyone know that one?) Wack speculation here, but I'm guessin Bill Bruford and Pip Pyle had to count up pretty high for some of those crazy Mont Campbell and Dave Stewart pieces in National Health. Now hear me out: neither is a singer, but Pyle wrote fine lyrics and Bruford grunted and shouted whilst drumming, so... kind of?

Sorry, I recently stumbled upon a large cache of photos from a Hatfield and Egg show in '74, featuring also--the Northettes, Geoff Leigh, Robert Wyatt, Lol Coxhill and a handful of other awesome sorts. Also Henry Cow. Fuck! Can't stop pouring over those.

Jeezus, where are my manners? Here's a link to the photo-dump:

And don't be a loser, just download the whole bunch so you can zoom in real close and revel in all the glory of Wyatt drumming alongside Pyle! Or Fred Frith with violin looking all sensitive-like! And check out those handwritten scores on the organ--not just chords or lead sheets, but actual scores!

Confession: I had a subscription to Keyboard magazine in my youth, mainly because Dave Stewart had a regular column.

Also remember that rule 5 of Punk Rock is "NO KEYBOARDS"! So that's The Stranglers firmly put in their Pub Rock Place.
Rule 6 was, never admit to your Prog Rock roots and continuing branches.

Always wondered about that keyboard rule--why were keyboards inherently uncool? Was it the price? In the UK and Europe (at the time), keys were invariably pricey, but in the US any poor slob could own a slew of keyboards--so long as you didn't have to have the latest piece of crap on the market. I mean, for the savvy, vintage keys could be had for little more than the price of a few records--until fucking Ebay, that is. Working class sorts tend not to become bassoonists, but anyone can be a keyboardist.

Was it the schlogging/schlepping aspect? It's not like drums are all that easy to lug around.

Do they connote some sort of wizardry or technical mastery? I _can_ actually play good, but, as a refreshingly non-pc reviewer once charmingly noted, I often play as though I'm "half-retarded."

For every annoying Billy Joel or Elton John sort out there, there's someone... less annoying, I guess.

Some years back, a band I was in backed a semi-famous sort for a couple of shows. He couldn't play at the time due to carpal tunnel or something, but, being a fan of Caravan, Egg and the like, he allotted some spaces for me to do extended fuzz organ solos--"extended" being the operative term here. Damn, I fucking shredded! The semi-famous sort, along with at least a few in the audience, enjoyed it immensely, but the rest of my band were royally pissed. Honestly, prior this, I never even knew they were capable of that level of animosity. They were ready to dump me in a ditch and violate me with power tools--instead, they did the next best thing (termination of employment). If that's not cool as fuck, then I don't know what is.

Seriously, I get the prog thing, but the keyboard hate has always eluded my understanding. But I swear, once I get my harmonium-and-weird-sort-of-drum-"machine"-thing off the ground, that's all about to change! (Also, the weird sort of drum "machine" thing is the product of nearly two decades of grueling experimentation and the contraption's actually got a goddam solenoid in it, so... the world ought prepare to collectively shit itself.)

I think mainly its the difficulty in jumping around when you're banging away without looking like an idiot...Elton John was a master at looking like an idiot at his grand piano along with having a pair of ivory tinkling hands like a bunch of cast iron bannanas.Horrible.
It was the introduction of keys into the Averts that finished them off.The urge to 'experiment' or move on by getting a synth also finished off Punk Rock....all because of rule 5..so I hope you keyboardists are proud of yourselves!
The guy in XTC was a notable exception to all this,but he still got the boot.