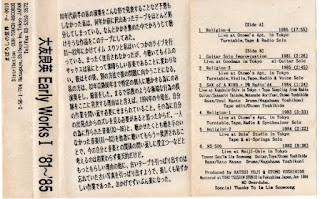 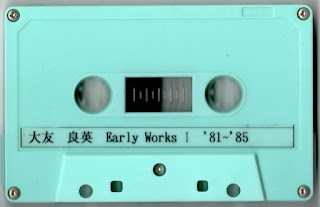 Back in the early eighties,guitarist and musicology student,Otomo Yoshihide, decided to dump his conventional music career after discovering free jazz and free improvisation musicians like Derek Bailey, saxophonist Kaoru Abe and guitarist Masayuki Takayanagi (from whom he had lessons).
As great as his influences were,Otomo had rather more strings to his bow than his heroes,using virtually anything he could lay his hands on,notably an early exponent of 'Turntablism",and sampling. In his hands the Turntable and,later, the sampler, would not be as cliched and unimaginative as most of his contemporaries would make them sound.He would go on to make dozens of albums which sounded largely completely different to each other...unlike Abe Kaoru and Takayanagi,his mentor in chief.
Here's a collection of Otomo's early experiments with tapes,electrified springs,turntables,radio's mixed with some obligatory free sax and guitar improvisation.
Tracklist:

DOWNLOAD  what religion's 4 HERE!
Posted by Jonny Zchivago at 01:18

Wow great tape. This is the kind of post that has kept me coming back to your blog for years. Thank you. Emil Beaulieau in the U.S also does interesting things with turntables.

Actually there's many Experimental Turntablists, like Philip Jeck, Christian Marclay, Dieb12, Martin Tetrealult and many others, maybe this is worth to start new "section" :D