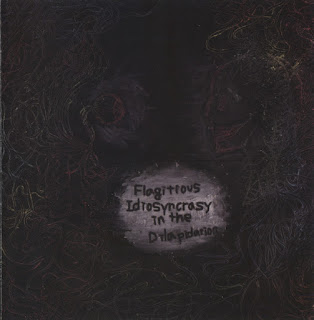 Yet Another Japanese all-female Grindcore band,that makes two that I know of ,are the ludicrously named 'Flagitious Idiosyncrasy In The Dilapidation'.....what does that even mean,or am I just Thick?
Of course they had to get a post on here purely because of their silly name,but they ain't nowhere near as good as Self-Deconstruction',whose version of Grindcore is infinitely more complex and unique.
This lot are far more conventional,and lean rather too far into the 'Metal' category for my tastes,or lack of therein?
But they are all-female,which is one up on Self-Deconstruction,but nowhere near as cute as.
The vocalist,Makiko.... notice that i didn't use the word 'Singer' as her job description.....has an unerring ability to sound like two or three different people,one of them surely male?...but no, she does all the voices. Definitely in need of a gargle after a show i should imagine? If there's ever a musical version of "The Exorcist" she is certainly a shoe-in for the Linda Blair role. A good Grindcore song title  is "Yer Grandmother sucks cocks in hell"......i dunno if that qualifies as eternal punishment for some grandmothers i know, but in Grindcore folklore it's just a bit of harmless cathartic fun to exorcise the demons of Japanese emotional repression.
The songs live dangerously longer than the one minute barrier,which is perilously long for any Grindcore to not outlive its welcome. Remember Napalm Death's one second song "You Suffer", the one that was ruined on their John Peel Session because some smart alek decided to put an immensely looooong Reverb setting on it....so much so that it lasted nearly 30 seconds....which just so happens, Ironically, is the perfect Grindcore song duration.
Tracklist:

Email ThisBlogThis!Share to TwitterShare to FacebookShare to Pinterest
Labels: 2008, Flagitious Idiosyncrasy In The Dilapidation, Grindcore, japan

would ya have any Spacegrinder from Japan?!? Honey, I needs!!!

Actually, I had a big ol' can o' beans last night,
and I became quite flagitious