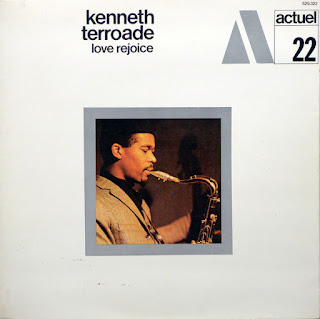 Well, we may as well go on a BYG Actuel tour,to further laud plaudits on France for helping save Jazz,even if they do insist on explaining away their imperialist past by insisting that anyone in the french empire was 'French' so how could they have been Racially prejudiced?Hmmmm.
This very Free Jazz outing by the groovily named Kenneth.......they have such hip given names these Jazzers, Clifford,Archibald, Albert....Terroade.The tradition continues,with Kenneth,avec some wild free improvisation on his Tenor Axe.
Included in the personnel is the shape-shifting Bernard Guérin again on Bass..... this time he resembles a couple of everyone's favourite mass murders, the late David Koresh,and/or, the late Dennis Nilson? He's got that fashionable murderer look going on here.
However,This album sure is a Killer of equal intensity as Béb Guérin's look-a-likey's Dave and Den,isn't that right Ken?....Ken???

DOWNLOAD and rejoice with the great kenneth HERE!
Posted by Jonny Zchivago at 12:22

Any more BYG Actuel you can throw our way will be gratefully received.

This has brightened my Saturday.

Thanks for this I didn't know ! Even I know K.Terroade... august 1969, again ?
It's time to submit "Beb Guerin" as one of your key words, so called "labels", insn't it ? He plays marvelously...
About french imperialism/colonialism ? Yes, it was a crime. As american invaders in the "New world" since the end of 15th century... as so many other crimes (and african people are not innocent for certain crimes). No reason to feel guilty today, for guys who condamn it. This guilt feeling is kind of a christian-bigot one...

Yeah Yann, there's more Beb to come,so i reckon you is right.

For Nick and others,
I would be glad to share Alan Silva Celestrial Communication Orchestra's"Seasons" (masterpiece free-pandemonium 3 LP) and "Luna Surface", on this blog ? If it's possible ? I have the Cds, and may rip them to mp3, but I do not know how to share that after...

New one to me - thanks! Pretty mindblowing stuff. Could end up among my favorites for whenever I'm in need of... this. Always though it was a funny thing with all the new age titles for these crazy blowouts. But it sort of makes sense as a lot of jazz-avantgardeists ended up there in the 1980's.

-Seemingly "everyone" hates Thurston Moore (I don't) but he steered me towards this kind of jazz and I have him to thank for discovering Echo - which I'm certain is coming up sometime in the following weeks.

Dave Burrell's "Echo" : great sound !... Sure, Mr Moore is a huge fan of this kind of stuff. We may thank him for being active in a pretty good 3 CDs compilation of BYG-Actuel recordings, well documented. This guy knows what he talks about...
I like T.Moore and Sonic Youth. Everything may lead to everything...
And let's also remember Don Cherry/Ed Blackwell's "Mu" !

"We may thank him for being active in a pretty good 3 CDs compilation of BYG-Actuel recordings" - right I've seen this CD-cover countless times, but never really looked into it and unaware that was him. Guess I'm such a snob that CD-comps are outside my field of interest lol. I just stumbled over his "Top Ten From The Free Jazz Underground +5" list-posted somewhere about a decade ago - and started investigating those.

-Yes, I've followed every footstep of Don Cherry's career, but coming from "regular 1960's jazz" I always got most "pleasure" out of the fairly "conventional" free jazz on Symphony for Improvisers and Complete Communion. But it's all great.

Thanks for this gem!