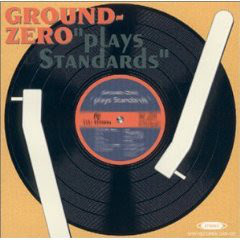 There was something about the Nineties that were distasteful in the upmost. Digital recording and the CD's themselves were primarily culpable. The silence of the silences were disconcerting,as was the fact that if you scratched a CD it was fucked instead of just making a click like vinyl did. Also because of the longer running time, the advent of the 80 minute track infiltrated the avant-garde, with albums that never seemed to fucking end. Then we had 'Sampling'......oh gawwd.....from bedroom dwellers with impeccable record collections,and even worse, impeccable taste!
Tony Wilson once said that the kids in Manchester had the best record collections....wrong.....The Japanese did,and its all here on Ground Zero's "Plays Standards CD", which at least keeps the duration down to a manageable 70 minutes.
I hated all this pop music culture in a perfectly recorded raspberry smoothie thang at the time, where the DJ became the centre of attention simply because he had a bunch of jazz records under his arm, and a fucking AKAI sampler in his bedroom.....as we all did in 1997.
Admittedly, the art of scratching or Turntablism can be quite impressive,and in the hands of the correct person, a creative tool. Otomo Yoshihidi could be said to be one of them? Mostly DJ's wanted to thought of as musicians(they aren't!),but here's one very accomplished musician who seemed to want to be a DJ!?
No-one's ever happy at doing what they're good at are they?
Although very guilty of the 80 minute long album track when 40 minutes is the limit of an average human attention span, Otomo was the world champ at eclecticism. Everything including several Kitchen sinks were thrown into his digital collages, and all done, with, obviously, thee most impeccable, "taste?";.......like an avant-garde Kenny Everett as the Cupid Stunt of post club art gallery aural aestheticism .
But, alas, as I'm now now also an aging Stunt, i kinda like this stuff in a nostalgic kinda way.....there are, however,some splendid moments of Free improvisation on this rather entertaining album.....and it is, ALL, done in the best possible taste.....YUK!
Those definitely weren't the days, but no-ones doing it nowadays,so it don't give one an 'eadache no more.
The sad thing is I ripped and sold all my vinyl in 2001/2 (see cupid stunt again?) to finance a house purchase.The funniest bit is that now i'm buying it all back with my new trendy turntables....yep plural.
So,I'd better buy my AKAI sampler back too i suppose?
Tracklist:

Thank you very much for this CLASSIC.

Agreed. This is such a great record. I've loved it since it came out. Anything by this band hits the spot.