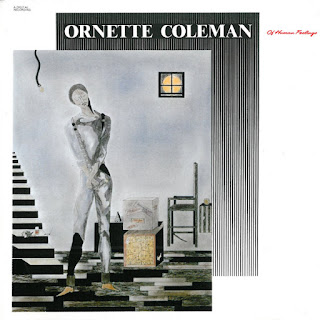 We honkies ain't got the Funk, which when translated literally from the language of 'Jive',means honky don't get the smell of sex brother...just ask Old Gregg.Neither have they got Game, but sport is for persons unnamed who were too muscular for banking, but not stupid enough for the army. Lack of sporting prowess for that pale limbed youth cannot be remedied without a stiff course of illegal Steroids,which will lead to a horrifying case of round shoulders and early death,either that or a damn good bumming from the coach.
Lack of "Funk" however can be helped somewhat by Ornette Coleman's foray into the world of Funk and Disco called "....Of Human Feelings". Gimmie some of that black creamy milk mother fuckers and move to the groove. On first listen one is struck by its bizarre Elevator music qualities,but that just lures in the casual listener,then infiltrates their reptilian brains with something strictly un-4/4. This is Disco music with a decidedly meandering purpose.A Vaccination against The Bee Gees. Now you can play Disco music without being embarrassed when your trendy chums ask "What the fuck is that you're playing???".....you can reply smugly..."It's Ornette Coleman man"......and still dance to some semblance of a marching beat which is necessary for da white man to express faux-joy of an evening.All after taking the knee of course to express unity with your black brothers.
I know there will be a bunch of Jazzers who think this is the worst Ornette album ever, but they ain't got the Funk have they,you dig?

lol is ornette coleman as good as captain bee fart? :)

In the 1960s it took me a bit of work to cozy to Ornette's quartet and trio recordings on Atlantic and Blue Note. But cozy I did! I began to hear the worth in them. Not my cuppa, exactly, but strong sturdy stuff nevertheless. He has a place in the canon. What followed in later decades, electric and highfalutin? Meh. Still, he has his place.

Wasn't that by The Sham Pistols with Phil Lynott on vocals and Ocarina?

Alvin Bishop you are a cruel task master!

Debs...no Ornette isn't as good as Beeefhart and band but is a better sax player,and wears worse clothes.

Jump Street!!!!! Rambling!!!! I have a feeling that all of my favourite musicians have two tunes in them which the rest of their work meanders towards and trails away from. I cannot be sure

Yep, that happens a lot.Most musicians only have one foundation tune in them,and if they lose concentration,they go back there,the default setting syndrome. Of course some muscians make a career out of playing the same tune for decades....like The Ramones as an extreme example.